Poor Daredevil has never had the best luck when it comes to being on screen. Apart from a few animated appearances, all he's really got is a poorly received movie that spawned an even more poorly received spinoff. And then there was that time in 1975 when David Bowie's wife tried to put him in a TV show. No, really.

In the early 1970s, the comic book version of Daredevil was living in San Francisco with his lady friend, superspy and superheroine Black Widow. Somewhere along the way, Angela Bowie—then-wife of David Bowie (and mother to Moon and Source Code director Duncan Jones)—decided she wanted to make this pairing into a TV series and co-star as Black Widow.

Bowie went to Stan "The Man" Lee with her ideas, and he actually agreed to let her move forward. She shot some conceptual photos with herself and actor Ben Carruthers in full costume, but the show never went further than that. Here's Bowie's own account as posted on the Daredevil fan site Man Without Fear:

"I received permission from Stan Lee to have the rights to Daredevil and Black Widow for a year. We were unable to place the series. Actor, writer, Benny Carruthers and I did the photo shoot with TerryO'Neill and Natasha Kornilkoff costume designer and Barbara Daly - make-up in London and that was all that ever happened. Unfortunately at that time it was considered too difficult and expensive to film, special effects etc." 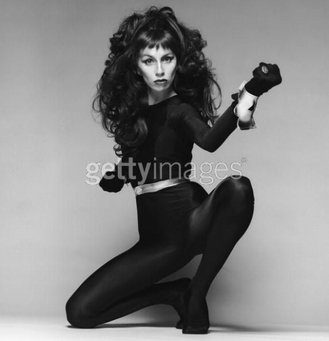 Based on these images, you can certainly tell it was the '70s, and apparently Bowie and Carruthers weren't taking the whole Daredevil being blind thing too seriously. Beyond that, we'll never know if this show would've been a groovy classic or a campy disaster that was so bad it was actually good.