The makeup dust has settled and, in last night's gala finale, Face Off declared its season-two winner. Rayce walked away with the $100,000 grand prize—but was his sci-fi trio deserving of selection over RJ's fantasy phoenix or Ian's hellhounds? Find out more about the finalists here, and let's discuss.

In the run-up to last night's finale, we asked each of the three finalists to tell us a bit about what most influenced their work. The answers won't be surprising for genre fans of our generation, but it's interesting to see how each artist's influences came through in his finished product. Check it out below, and then vote in our poll and sound off in the comments as to who you think should have won Face Off! 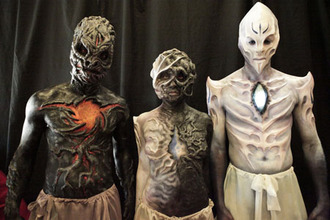 "I would have to say that my influences in makeup came at a young age, when my dad would let me watch the movie Predator. I was fascinated at how real this creature looked. Not only that, but the imagination that went into the design of a character like that also inspired me much of my childhood.

"I remember the day after watching the movie, I sat and drew for hours upon hours, creating my own renditions of Predator. Not long after I was introduced to Predator, my dad also decided to show me a movie called Alien. I was also mesmerized by this movie and the character in the suit!

"As I grew older, my love for these characters didn't cease, and I eventually found myself doing research on movie magic and reading up on how these amazing characters were created. This, of course, would eventually lead to me buying my first mask kit, and thus began my journey into creating monsters!

"I've spent much of my life hiding my monsters from the world, and now it's time for me to let them go! Be free, children ... be free!" 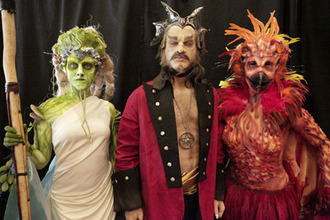 "I was inspired to get into effects by a wide and varied collection of movies, but no one had more of an impact than any other. I have always leaned towards the science-fiction and fantasy genre over horror; the challenge was to decide which of the two to choose from.

"In my younger days, Star Wars lit up my life, with all manner of otherworldly monsters to entice my imagination; I was mesmerized by Darth Vader. Then, as I grew, I started to find inspiration in puppets. Jim Henson's Muppets, Labyrinth, and particularly The Dark Crystal, Little Shop of Horrors and E.T. influenced me greatly to learn puppetry arts. The movies that pushed me from puppetry into makeup effects were Tim Burton's Beetlejuice and Batman. These characters and creatures were more than just big masks; they were faces that moved and fluidly changed the actor's face, creating something otherworldly.

"As a young teenager, I was obsessed with Jack Nicholson's Joker and tried to work out the secret to that smile, because I wanted to be him every Halloween. That's when I discovered what foam latex was! Then, hot on the heels of Batman were all the imaginative villains in Dick Tracy ... all these films were inter-dependent on technicians and artisans with similar skill sets to bring these things to life under the 'effects' umbrella. " 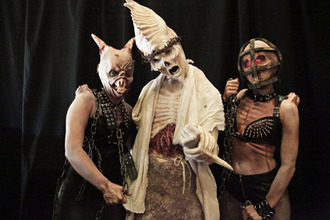 "My love for this art grew from when I was very young. I was a huge fan of Ghostbusters, Ninja Turtles and Batman. I was always drawing them, which eventually led to me attempting to make my own ghost-catching equipment or building my own batsuit out of my toys and pajamas with velcro'd-on cape.

"I do remember the first REAL introduction to the world of FX that changed my life was Movie Magic, a great TV series in the '90s. Seeing how Rick Baker created an 8-foot Sasquatch named Harry and how Steve Johnson created a gluttonous ghost named Slimer, or how they made the miniatures for Terminator 2 when the city is destroyed ...

"I love everything about special makeup effects, because you get to create whole worlds filled with characters and creatures never seen before, or just subtly add wrinkles and folds to make someone appear old. It's limitless, and I love that aspect."