Stop saving your pennies—the most recognized star car on the planet is off the market. Adam West's classic bubble-topped, flame-spitting hot rod sold to an Arizona software mogul, and here's how the caper went down ...

Bat-bucks were swarming Saturday night at the 42nd annual Barrett-Jackson Car Auction in Scottsdale, Ariz. George Barris' beloved Batmobile #1 sold for a wallet-busting $4.62 million, the most money ever paid for a movie car. When the smoke cleared, the last man standing was Rick Champagne, a local logistics company owner and notorious car collector.

Christian Bale explains why he turned down the offer to make a fourth Dark Knight film
Batman: Soul of the Dragon's Bruce Timm on R-rated heroes, James Bond-style opener, and 'superhero dominance'

The tricked-out Batmobile began life as a 1955 Lincoln Futura concept vehicle before Barris customized it for the 1966 Batman TV show and movie.

The crime-fighting cruiser crossed the block at 7:15 PST with Bat-theme blaring, paraded out under the glaring spotlights of cavernous Westworld arena. Bidding quickly crossed the million-dollar mark as warm bodies encircled the black beauty, cheered on by a legion of rabid Bat-fans.

When a cool $2.5 million arrived, the reserve lifted, ensuring someone would drive it home. Soaring past $4 million, two fierce bidders remained locked in battle, with the victor eventually decided by a simple coin flip. (I'd check that quarter!) 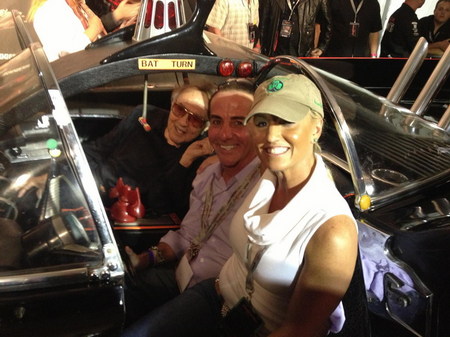 Champagne emerged triumphant, grinning and accepting congratulations for a hammer price of $4.2 million, plus the 10 percent buyers premium. The lucky winner plans on knocking down walls in his Arizona home to park the Batmobile in his living room.

What do you think? Holy Grail of pop culture or Holy Sticker Shock?