The movie, from producer Robert Rodriguez and director Nimrod Antal, stars Laurence Fishburne, Adrien Brody, Topher Grace, Danny Trejo, Walton Goggins and Braga as a military sniper. The prequel centers on a band of humans trapped on the predator homeworld.

In Predators, Braga said she had to rise to the challenge of playing a bad-ass special forces sniper. "I never thought about [being an action hero]," Braga said. "I think it was a challenge that came up. I'm a small, short girl, not really tall. I never thought about myself running around and punching and shooting. In Predators I'm a sniper, and truly my gun was the heaviest gun on set. It's 14 pounds. Everyone is with a knife, with a pistol, and I'm with a rifle, and I'm carrying that all through the film. I'm like, 'Why am I carrying this? Seriously, why am I carrying this?!'"

Braga is already well on her way to kick-ass action-heroine status: She counts among her credits I Am Legend and Redbelt and co-stars with Jude Law and Forest Whitaker in the upcoming sci-fi action movie Repo Men.

"I totally love the challenge to portray somebody like that character," Braga said of her Predators role. "It'll be great if something comes up as another action figure. That type of character is a nice challenge, physically and emotionally, because it's a different type of woman that faces that kind of thing." 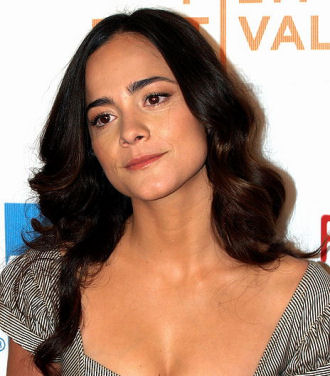 Asked if her character in Predators is chasing predators, Braga replied, "I'm being chased. I'm kidding. I think we're both in the same situation. It was a fun shoot. It was hard. It was hard because we went through weather conditions in Austin, really cold and working outdoors. But it was a blast."

One of the predators is played by Derek Mears, best known as Jason Voorhees in the recent Friday the 13th remake. "He's like really, really big," Braga said. "I was barefoot, close to him. He's great. It's not anyone that can play those characters. You need to have a body presence, so having someone that tall, that big, with me—and I'm 5 feet, 3 inches, 5 feet 4—was great. That gives you the [she gasps audibly] desperation [of the character]."

For the latest sci-fi news, follow us on Twitter at @scifiwire
Tag: Predators
Close Search Return to SYFY homepage.