Priest is a future western that pits 'Jedis' vs. vampires

Director Scott Stewart and actor Paul Bettany had so much fun working together on Legion that they teamed up again for Priest, an upcoming futuristic vampire story based on a Korean comic book. In the movie, Jedi-like warrior priests battle vampires in a post-apocalyptic wasteland that's like the Old West.

Thing is, the comic book wasn't a future story and didn't deal with vampires; rather, it was set in the actual Old West, and its main character, the immortal priest Ivan Isaacs, instead battles fallen angels.

"Min-woo came out and visited us over the summer," Stewart said in a group interview last week in Los Angeles. "He'd read a translation of the script and came out and was really, really pleased with what he saw. We talk about the graphic novels as being the past, and [the film version of] Priest is kind of the future."

In the movie, the fallen angels are now vampires, but otherwise the graphic novel is the film's history. If that doesn't make sense, the graphic novels are even making adjustments to bridge the gap between literature and film.

"You'll see: Tokyopop, with Min-woo, created a continuation" comic series, Stewart said. "He had 16 books, but it was kind of a soap opera with no ending. It never continued, so you don't know where the story goes. And now there are new stories that will be coming. You'll see how that story dovetails with ours. The Ivan Isaacs character in the Priest comic book is the first prototype Priest. The characters in our movie are what came much later, when the Priests were trained by the church to be like Ivan Isaacs." 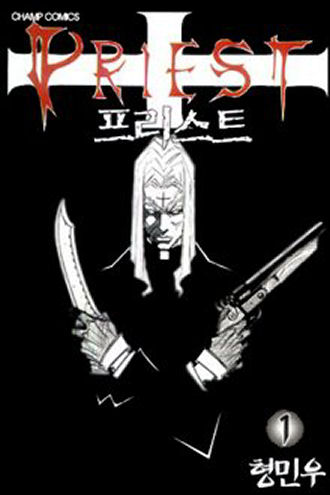 In the movie, Bettany stars as a character simply named Priest. "It's a very different story for me [from Legion]," Bettany said. "It's a hugely different character in that Michael is all about forgiveness and faith, and Priest is about revenge. He just wants blood. We went into it with the same spirit, but with three times the budget, which changes everything."

With more money to work with, the future setting of Priest allowed Stewart to play with the visuals. "It's got lots of action and stuff, but it is literally a science fiction western," Stewart said. "It takes place in an alternate universe. There's retro-futuristic things, motorcycles instead of horses, and big industrial cities. The whole mythology is entirely the history of the vampire/human wars and all this other kind of stuff. The Priest characters are like these Jedi Knights."

Priest will have something to say, too. Even though the Priests are fighting vampires, they deal with the same problems that face human soldiers returning from human wars. "It's kind of an 'after the war' movie," Stewart said. "What happens when, as a soldier, you make a sacrifice, you go off, you fight the war, you win the war, you think you're going to get the ticker-tape parade down Broadway? Instead they decommission you, and you work in a factory, and no one sits next to you on the bus because people are afraid of you. What happens a generation after that, when now you have to go and do something for yourself and the people who sent you out there say no? You have to defy them."