Producer: What to expect from Chuck's new season

The creators of NBC's Chuck aren't about to let the audience forget about the show during its long hiatus until midseason—they're planning some kind of Web presence, said Chuck executive producer and co-creator Chris Fedak.

"We're talking to NBC now about what is going to be the super-clever idea to kind of bridge that time. It is going to be something on the Internet to keep fan awareness alive and remind people about the show," Fedak told SCI FI Wire in an exclusive phone interview.

Fedak added that Chuck, which was picked up for midseason by NBC, may appear sooner than the expected March 2010.

Chuck is set to air in its same timeslot, on Mondays at 8 p.m. ET/PT. That's good news for fans who lobbied NBC and key sponsor Subway for the show's renewal. But with Chuck's third season planned to premiere in March 2010, that's a very long wait. "We're excited to launch after the Winter Olympics and to launch also with NBC's other new show [Day One]. But schedules aren't written in stone for a reason. So you never know. Maybe you'll see us sooner than that," Fedak said.

One thing the producers will be faced with in the new season is a smaller budget. "Across the board in television this year there's been a contraction in regard that every show has had to find ways to lower their budgets," he said. "And then [creator] Josh [Schwartz] and I, we have a really an excellent production department here at Chuck, and we've made changes to the show. But essentially we're committed to delivering a show like the show last year, and the changes we're making will not impact the quality of the show. We've also, after two seasons of making the show, we've gotten better at it, just from a production perspective, and we find the efficiencies and just learning how we tell our stories."

Another factor will be the presence of Subway in the show in some way, thanks to NBC's deal with the sandwich chain. How will that presence work? "We're still in the early stages of figuring that out," Fedak said.

The show will resume production this summer. "We're actually just getting back up and running with our writers," Fedak said. "So I am knee-deep in the writers' room, working on story, kind of cutting into how we're going to tell this epic season of Chuck. ... We have some really fun, super-exciting stories up on the board, and we can't wait to tell them."

Asked about specifics, Fedak isn't too forthcoming. "You're getting nothing out of me," he said, adding: "Do you know what Schwartz would do to me if I give you anything? Mum is the word at the moment." 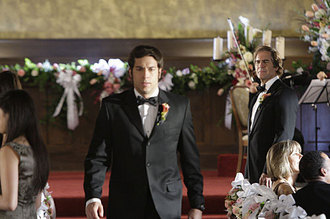 Maybe just a tiny, little detail? What about the teaser from a recent interview with Schwartz that there might be a romantic interest who would come between Sarah and Chuck? "Crickets. That's what you get from me. You're getting crickets on this one," Fedak said.

The one thing that isn't a secret is that the producers plan for the entire cast to return, he said. As for adding new characters, "We will be, but you're not going to get that out of me, I don't think," he said.

Expect a more physical Chuck (Zachary Levi), considering that he acquired new kung fu abilities after downloading the new Intersect. "Absolutely. Get ready for excitement," Fedak said. "And we also look forward to deepening the mythology of the show, learning more about our characters and, most importantly, having fun."

As for the possible romance between Chuck and Sarah (Yvonne Strahovski)? "In the interest of vagueness, I will say that this new upcoming season of Chuck will not be lacking in romance," Fedak said.

The cagey Chuck creator did have more to say when it came to discussing the season-two finale, "Chuck vs. the Ring," however. "We were very proud," he said. "We were very proud of our entire season, but we were really excited to tell the story and that we knew where we were going, and we knew we had this big, epic finale. All the writers and producers, everyone involved in the show, we knew we weren't going to leave anything on the table for the fans of the show. We knew that essentially there would be a point in time during the final episode where everything but the kitchen sink, and maybe even the kitchen sink itself, would fly through a frame ... and you would see the Chuck show at its best." Fedak gives plenty of credit for the episode to director Robert Duncan McNeill (Lt. Tom Paris of Star Trek: Voyager fame). 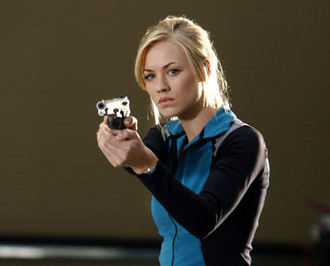 For Fedak, there was one specific moment that resonated with him, and it came during a table reading. "I sat down at the table with the cast of that episode, and I just shook my head," he said. "I felt like, for that episode, we hired most of Hollywood. I had Bruce Boxleitner, Morgan Fairchild, Scott Bakula, Chevy Chase and our cast. I mean, our fantastic, wonderful cast, and Matt Bomer as well, and I immediately demanded that we have a photograph taken, because it's something that, actually, ... [I knew] this would be one of my favorite moments, this cast read-through. And they killed. They were wonderful. They were wonderful just reading the script, and they were just as wonderful on screen. Allison Adler and I wrote that script, and it was a really wonderful kind of moment to see the Actors' Studio version of our story before we filmed it."

Fedak added: "I'd just like to say, and this is more like a general thing, that we're just so thankful to our fans for all the support that they've shown. It has been ... it was incredibly important to the show, to the show's return, their energy and excitement. And the other thing, too, is that critics and journalists have been just so helpful and supportive for the show. It just seems like we needed every arrow in our quiver, and you guys were there for us." Chuck will return on NBC after the Olympics in March.