Think Awake is like Inception? The creators have no problem with that

NBC's Awake isn't your average sci-fi show. In fact, executive producer Howard Gordon and creator Kyle Killen aren't sure it's sci-fi at all.

"It is not about the space-time continuum or about particle theory or string theory," said Gordon. "It is really about an emotional response to loss and how this man's mind created the premise that we are enjoying dramatically."

Awake, which premieres tonight on NBC at 10 p.m. ET, follows detective Michael Britten (Jason Isaacs), who lives in two different realities. In one his wife survived a mysterious car crash, and in the other his son survived. Unwilling to let either reality go, he appears to have created two separate intricate realities where he has different partners, different cases and different home lives.

"If it is science fiction it is emotional science fiction. It feels less sciency and more personal," said Killen. "It's something that you do in response to a great, deep personal need, as opposed to the laws of physics allow it."

"I thought Inception was an incredible movie," said Killen. "I don't know how much we have directly in common with it, other than there is certainly that idea of your waking life and your dream life and the dreams feels incredibly real, sometimes so real that you can't quite tell which is which. I think beyond that, Awake is not necessarily an Inception-like experience on a weekly basis. We are simply playing different notes. But anytime someone associates your work with something that is iconic and, I thought, fantastic, I have no problem with that whatsoever." 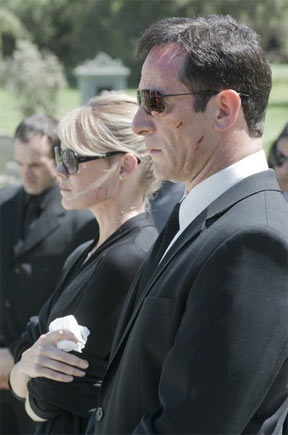 "We wanted to take things that people were familiar with and stories and shapes that we are tried and true on television and bend and twist them in a way that felt new and interesting. And by putting two stories against each other and through the lens of what is real and what is not, I think we have found some interesting stories that comment on each other in a way that you just aren't able to do with other shows," said Killen.

"It also plays with a very interesting premise, which is 'What if we were faced with this terrible loss, and what if we could have them and yet not have them?' And there it is. It asks a really fundamentally fascinating and very emotional question. And again, through that prism tells procedural stories. But at the very heart of it there is an incredibly emotional premise," said Gordon.

However, the producers want you to know that this isn't a show that revolves around figuring out which world is real. "The show is really about a man who has decided and desperately wants to live in both of these worlds. Who refuses to acknowledge which is real and which isn't," said Killen. "And as you try to live two lives in parallel and you see them start to go in dramatically different directions, I think the idea is that hopefully the audience, like the character, becomes invested in not wanting to let either of those go."

"Because as long as he has got both of them, he has got access to his wife and his son, then he hasn't really lost anything. And the upshot for a detective living across two worlds is that he discovers that the cases in one seem to sort of be reflected or replicated in the other. And that provides him with insight and clues that allow him to do his job differently than he did before, and differently than any other detective that we have gotten to see on television."

While Michael Britten may not have any interest in figuring out what world is real, he does use a red and green rubber band around his wrist to determine which world he's in at any given moment. The producers had their own challenges when it came to filming similar yet different worlds. And their solution ended up being very similar to Michael's. 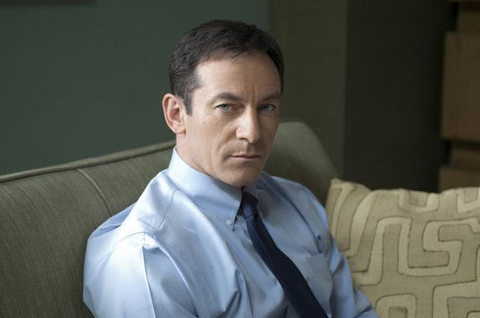 "That absolutely was one of the trickier elements of getting started. We found that we would get confused when discussing what someone was pitching or talking about. So we have adopted [that] one world is the green world. That's the world in which he has his son and his partner is Bird and his therapist is Dr. Evans, and that matches his green rubber band. When we are talking about it, we write in green marker and we use green notecards," said Killen.

"Our outlines are written in green and red ink. Like anything, to make it crystal clear. The other world, the one with his wife and Vega partner and Dr. Lee, that's always red. But that is reflected in the final product with the way that the show itself is shot and color-timed. The two worlds have a different feel. David Slade, our pilot director, developed that language for separating," he said. "And hopefully when you see it on the screen you are pretty instantly oriented as to which world you are in."

While Awake will focus on Michael's family, his partners and his therapists, there are a couple of significant recurring guest stars who are more than a little familiar to sci-fi fans.

"We've got Kevin Weisman from Alias. He did a long arc at the end of our season. He is in the last three episodes," said Killen. Weisman's arc "goes to the heart of that idea of being able to keep the people from one world separate from the other, and the problems inherent when you aren't able to do so."

And Laura Innes from The Event was initially signed for a guest spot, "but we ended up really building out that role. So she is in numerous episodes and has a really big part in arc for the season," he said. "She is the captain of the precinct where Britten works in both worlds."

Here's a look at the first seven minutes of Awake: