Push stars Belle and Hounsou were confused, so will we have a chance?

It's good to know we weren't the only ones confused by the constant plot twists and convoluted storylines of Push: Stars Camilla Belle (KIra) and Djimon Hounsou (Agent Carver) admit that even they had trouble keeping up at times.

"I remember a few moments where we all sat down and said, 'What happens? Where are we supposed to be going now?'" Belle told said in a group interview over the weekend in Los Angeles. "The plot itself is very confusing," she laughed. "We still don't understand exactly what happened."

In the film, Belle's Kira is a "pusher"—someone with the ability to manipulate memories—who has escaped the government agency that's trying to experiment on her. Hounsou's Carver is an agent of the secret government agency known as "Division" who is trying to retrieve Kira. Carver is also a very powerful "pusher" and a master of telekinetic ability.

"You do have to surrender," Hounsou said with a smirk at the twists and turns of Push's plot. "At that point it's all hell for the director. I can't keep up with where you are at all times. As an actor, you become too analytical about the story."

The role of the ruthless, powerful Agent Carver afforded Hounsou (Gladiator) his first chance ever to play the bad guy, which attracted him to the character. "I've never played a bad guy," Hounsou said. "This was nice. It's one of the reasons [I chose this], but the most important reason was the theme of the story, to tap into that cult world that most of us are doubtful about and whether our government is actually utilizing that stuff. That was my attraction to the story."

Likewise, Belle (10,000 B.C.) was drawn to Push because it gave her a chance to try her hand at action again. "Our stunt coordinator, Nick Powell, he had done films like Braveheart and Last Samurai," Belle said. "I felt like I was in really good hands with him. What I loved about the fight scene was it wasn't martial arts or anything I'd do with formal training. We had a week and a half of training. It was more about choreography. When you get to the day, it's all about muscle memory. It's just in your body, and hopefully you don't hit a person in the head too many times [laughs]." 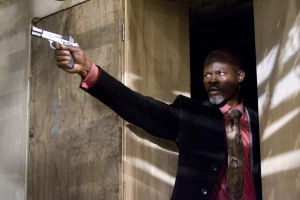 The majority of Push was shot guerilla-style in Hong Kong using handheld and hidden cameras. Director Paul McGuigan wanted to avoid green screens and limit the slick computer backgrounds. As a result, the crowded streets of the city became another character in the movie.

"It's so crowded," says Hounsou. "I was in shock the way they pass each other in that city. People bump into you hard and don't even turn around or say sorry. You better just keep on going. Nobody has time to fight you. It's so overwhelming."

Cameras were hidden in windows, behind trucks and in just about any other place they could avoid drawing attention. "We had one scene where I get grabbed by [Hounsou]'s two agents," Belle said. "I wish I had seen some of the reactions [of passers-by]. I was in the scene, so I couldn't see it, but I heard that some people stopped and freaked out. Other people just kept going and couldn't care less." Push opens Feb. 6.