Quantum Leap's 20, and Scott Bakula travels back in time with us

Scott Bakula—who played the time-jumping Sam Beckett for five seasons on TV's Quantum Leap, from '89-'93—talked exclusively with SCI FI Wire about the show's 20th-anniversary celebration last weekend in North Hollywood, Calif., and whether a movie will ever come together. The former Enterprise captain also dished on Star Trek and his guest role on NBC's Chuck.

Bakula shared the stage at the "Leap Back" convention with series creator Don Bellisario, and after 20 years fans are still as passionate as ever about the beloved sci-fi series.

One woman was so overcome about speaking to the star of the show that she was unable to ask her question. When Bakula walked out into the audience to hug her, she told him that she knew his character's Social Security number by heart and immediately rattled it off.

We spoke exclusively with Bakula in a telephone interview on Thursday. Following is an edited version of our conversation.

I was at the event on Sunday, and it was pretty crazy! What is it like to have this kind of fan reaction after 20 years?

Bakula: When the sci-fi fans like you, they stick with you. I've certainly found that to be true with this show. And with Enterprise [in which he played Capt. Jonathan Archer] also. But 20 years is a long time, and a lot of these folks are not only at the sci-fi conventions, but the theater when I'm in Washington, D.C. They support charities that I support. They do Leap Cons different places where the benefits go to charities. They've been just really great, not just fans of the show, but they've been active in terms of supporting some of the causes that I support, some of the causes that [Leap co-star] Dean [Stockwell] supports. They're just a good bunch. ...

I didn't talk about this on Sunday, but they were part of a huge letter-writing campaign when our show was on the cusp of being canceled. They did a commercial on NBC. Warren Littlefield was the president at the time. The commercial was them dumping letters, ... the letters were falling all over him, and he said, "All right, all right, enough. Quantum Leap's coming back. Stop writing!" So they were instrumental. I've always felt very close to them, because their activity and their insistence, ... when they fell for the show, they really fell for it, and they were vocal about it.

What do you think it was about the show that made it so popular?

Bakula: Well, I think Sam represented Everyman, and there was a naivete about him. The very simple nature of the show being about someone literally walking in someone else's shoes and seeing the world through their eyes. We're so involved in our own lives, but when you think about being that woman over there, pushing that stroller with the two little babies, and what is her life like ... and all of a sudden we're in her life. We knew what was going on. ... The nature of his character was, because of his big-hearted kindness and his willingness to be involved in other people's lives, ... humanity is always looking to help each other and look out. Sometimes it takes big tragedies. Look what the people in New Orleans did or the people in New York did. Or the people on the plane that went down in the Hudson. Look how they handled it. They reached out and helped each other. This was just one man in a TV show. It was very simple and kind of magical. 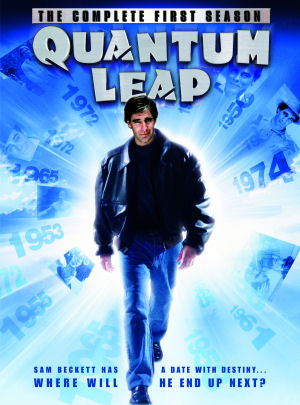 I know Don was talking about some of the kisses with history on Sunday and his theory that there was only one shooter in the assassination of John F. Kennedy. Quantum Leap dealt with that in one episode, and it was controversial. I was dying to know if you agree with him.

Bakula: Oh, I disagree with him [laughs]. But that's the joy of working with Don. He encourages disagreement, and he's very vocal about his beliefs. You know, we turned him on to some things that we wanted to push for. We got some environmental issues in. I would push him on social issues, and he would open up to those kinds of things. He's very clear that one man ... I'm not saying that one man couldn't have made that shot. I don't understand the trajectory of that one bullet. I don't understand now that they've been able to re-create that. I don't know how one bullet does that. But I'm not a gunman, and Don is. Crazy things happen. I think there's a great desire in our culture to believe there was some sort of conspiracy and that one simple man couldn't get away with that. The only thing that's compelling to me about the lone gunman is that it's so odd, is that after all these years, that somebody on their deathbed didn't come forward and say they were a part of that or take credit for it. ... It made a good movie [laughs].

Well, speaking of movies, you and Don talked about the possibility of doing a Quantum Leap film. He said that NBC Universal owns the rights and that it was difficult to work around that. I know you said you'd like to do it. Is there any possibility of it happening? I'd certainly love to see it.

Bakula: I think each day it becomes slimmer and slimmer, certainly for Dean and I to be a part of it. But I think he simplified the situation. There are all kinds of rights issues that are looming and problematic. It's not as simple as Don wants to get some money together and make the movie. ... [But] you never know.

You've been part of some major sci-fi series, Star Trek: Enterprise being one. After having gone through that experience, I have to know what you think about the new Star Trek movie coming out.

The trick is, they've got to bring it up to date and make it hip and sexy and fast and all the things they can do with effects now, and keep the die-hard fans in the theater. I'll be curious to see if they'll be successful with that. I hope they are.

We were trying to make that bridge with our series, and we had resistance. There was no question that some of the Star Trek fan base was not ready to go there [laughs]. They just didn't want to do it. A guy stopped me, and he said, "Oh, I loved that show, I loved it, loved it, ... except for the theme song" [laughs]. I was like, "Man, people should just ..." But they're not willing to give it any slack. If they don't like it, they're vocal about it. But if they like it, then you're made. ... The trailer looks fantastic. And, obviously, [director J.J.] Abrams knows how to make a movie. And, hopefully, he will have succeeded, and the studio will say, "We shouldn't have canceled Enterprise" [laughs].

I know you're doing a stint on NBC's Chuck, and you're playing Chuck's dad. I interviewed the cast, and they said that you knew everything about the show, and it seemed like you'd been watching every episode, knowing you'd be on.

Bakula: [Laughs] Well, I had some inside information. I talked with the executive producers, and we had a long, almost an hour conversation with Josh [Schwartz] and Chris [Fedak] and I. And I'd seen a bunch of episodes, but there was a lot of fill-in-the-blank stuff that I needed help with. I can't say that I knew everything about it, but I knew a lot. ... It's a great show, and they're doing really wonderful work. It's a great cast, very talented, and they're extremely dedicated and hopeful about the series, and I am too. I hope they get picked up. ... Bonnie's [Bonita Freidericy, who plays Gen. Beckman] a good friend of mine. Her husband, John Billingsley, was on Enterprise with me, and I'm rooting for her. ... It was fun.

IMDB has you listed as doing three episodes. Any chance you'll do more?

Bakula: As far as I know, there's these three.