The script book for Christopher Nolan's entire Dark Knight trilogy is out, and one fan has run across a small scene that was cut from the final version of The Dark Knight Rises. Want to read the script page and see what we missed? Minor spoilers ahead!

The scene follows a conversation between Lucius Fox (Morgan Freeman) and Miranda Tate (Marion Cotillard) at Wayne Enterprises, wherein they're discussing John Daggett's (Ben Mendelsohn) attempts to gain control of the board.

The bit of dialogue establishes that Bruce Wayne (Christian Bale) maintains majority control of the company, something we're mostly left to assume when Daggett sends his goons to physically take over the board. 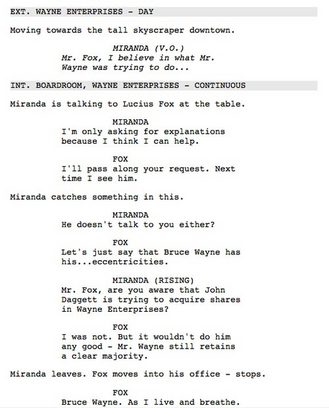 We didn't lose much with this snip, but it's interesting to get a feel for the edges that were trimmed to get the run time down.

What do you think of Nolan's cut of the film? Did it flow well, or are you hoping for an extended director's cut once it hits Blu-ray?