The season premiere, which airs at 8 p.m. ET/PT, has Sam (Harrison) and his friends returning from vacation to find their lives back to normal: The Devil (Ray Wise) has more souls for Sam to capture, yadda yadda yadda. But Harrison says the Devil is the least of Sam's drama this year. (Possible spoilers ahead!)

"The show overall this season is actually more about the guys' relationships," Harrison said in a phone interview on Thursday. "Sock [Tyler Labine] falls in love with his newfound stepsister. Ben [Rick Gonzalez] is falling for a demon who was sent to attack Sam, and he doesn't want to tell Sam that it's the same demon that tried to attack him. I think overall the show is much more right now, at least in the second season; it's more about the relationships and these characters evolving."

The season premiere ends with Sam's meeting Alan (Sean Patrick Thomas), an escaped soul who got out of his contract. Harrison spilled more details in our interview; following is an edited version.

Will the hunt for Alan, the escaped soul, dominate this season?

Harrison: Yes, it's actually probably the biggest driving factor of the whole season. He has everything that Sam wants, but the problem is, this guy wants nothing to do with Sam because he thinks Sam is evil. It is known in the underworld that Sam is the son of the Devil, and there's a demon rebellion that is after him now because he's the son of the devil and he's evil. So it's this conflict of him trying to go after this guy Alan and convince him that he's a good person and he wants the same thing. It's all in trying to, first of all, find him, and then convince him and find out what it takes to beat the Devil.

But if you want the show to run several years, Alan can't have all the answers.

Couldn't Sock go to hell for coveting his sister?

Harrison: I'm sure he could. He doesn't, though. Somebody does go to hell for coveting, believe it or not. It's actually quite a hilarious show. There's a character named Billy who gets caught coveting. Walking down the street, he's undressing some lady in his mind, and he gets hit by a truck, ends up going to hell and comes back, and the guys find out that he's a virgin. Billy, the soul, convinces the guys, "Just get me laid, and then you can send me to hell." So the whole episode is Sam, Sock and Ben trying to get this guy laid before they use the vessel and send him back. 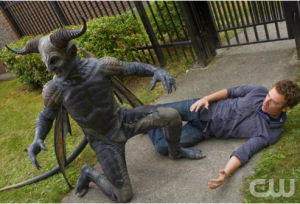 Harrison: It's revealed a couple episodes in that Sam has a half-brother who's the more evil one. He's cocky and better looking, but he's really naïve. He's really stupid, which makes him really likable, but he's having this relationship where Sam is having to train Morgan [Armie Hammer] and teach him the ways of the dark side, but Morgan doesn't want anything to do with it. Morgan is really bad at catching souls; he actually bribes Sam with $20,000 to put the soul in his name.

Is there more action this season?

Harrison: There is more action. The first episode that comes to mind is a boxing episode. There's a soul who's gotten out, and he's a boxer. It's our Rocky episode, and Sam has to train. He can't box the guy; he's getting his ass kicked the whole time. Sock and Ben decide, "Look, if you can't beat the guy up and you can't box him, then you might as well learn how to dodge him." So they set up a pitching machine in the warehouse and shoot baseballs at him. There's certainly action. In every episode there's something kind of like that, but I think even though there's a lot of action, it's much more about the relationships and the characters evolving this season. All the guys have girlfriends in the series, and it's more going that way. I think what's going to make the show go and people fall in love with it is the characters.

Is there hope for Sam's relationship with Andy [Missy Peregrym]?

Harrison: There is hope. It kind of goes back and forth, but for the first half of the season Sam is going really strong with Andy. I think Andy starts to see that Sam is going to the dark side a little bit, and he's starting to enjoy what his job is a little bit more. She's seeing that in capturing these souls and going after these bad guys that he's starting to enjoy it a little too much, and she starts to see it as sick. So they do break up eventually, and there's quite a big reveal towards the end. They might be on similar ground at some point.