Reese Witherspoon, star of the upcoming 3-D animated sci-fi movie Monsters vs. Aliens, told reporters that the toughest part of playing a super-sized woman was spending so much time alone in the recording booth. "It was hard for me," she said in a news conference last week in Los Angeles. "It was almost like acting class, where you're doing monologues. There's nothing in front of you, there's nothing informing the whole story, and there's no other actors to work with."

In Monsters vs. Aliens, Witherspoon voices Ginormica, a would-be bride who is struck by a meteor and becomes, well, ginormous.

Co-star Seth Rogen (The Pineapple Express) voices a blue gelatinous creature called B.O.B. "It's a little different than your traditional filmmaking process," Rogen said. "It's very performance-based in a lot of ways; there's no technical aspects, really, to consider. There's no cameras or marks, you just stand there and talk. I like it."

Witherspoon added, "Some parts are hard, but ultimately it's an opportunity to just be really silly and goof around."

Ginormica is the leader of a group of monsters—including the brilliant but insect-headed Dr. Cockroach, Ph.D. (Hugh Laurie); the Missing Link (Will Arnett); Rogen's B.O.B.; and the 350-foot Insectosaurus—who are enlisted to combat a giant Alien Robot, driven by Gallaxhar (Rainn Wilson), and to save the world from imminent destruction. The film is a loving sendup of classic 1950s sci-fi movies.

What appealed to you about the story, and how did you first get involved?

Witherspoon: When [DreamWorks Animation chief Jeffrey] Katzenberg took me on a tour around the studio and showed me the artwork for this movie, first of all, I was into the idea that these 1950s B-movie monsters became heroes. I watched a lot of those movies as a kid with my dad, and I just thought it was a really good, modern concept. And then to put a woman at the center of the film was pretty amazing, because I've been offered some animated movies, probably not as many as my counterpart here, but they don't make a lot of movies like this with a woman at the center of it and her story. So it was a great opportunity to create a female superhero. I talk to my kids a lot about "What's your favorite superhero?" And my son can name, like, 27 different male superheroes, and my daughter's like, "I don't know. I can't remember any of them." So this is hopefully an opportunity, and people will start liking these characters and they'll make more of them.

Seth, what's the biggest benefit of playing a character without a brain? 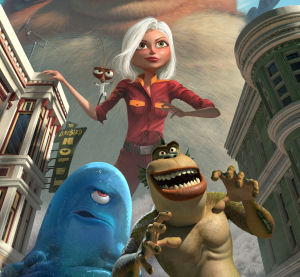 Would you say the movie is more about Susan becoming herself? It seems like she's finally able to do everything she ever wanted to when she becomes Ginormica.

Witherspoon: Yeah. I think the movie is about a lot of different things. I mean, I remember being a kid and how important my friendships were, and this movie has a really strong friendship message in it and how important those are, and also, if you feel a little different on the outside, there's a group of people you fit into—and you guys just might collectively save the world!

Seth, how fun was it to bring out your inner child to play B.O.B. in this film?

Rogen: Normally my roles are pretty intellectual, so it was kind of nice to shed those shackles and just be able to be immature a little bit. But, yeah, my first concern was "How will I be funny without profanity?" It was definitely a real fear I had, but the answer is if you get very clever people to animate you, it makes up for all of the profanity in the world and actually makes quite a delightful movie.

Can each of you talk about the development of your performances just being in front of the microphone? Did they put things around you specific to the part of the movie you were working on?

Witherspoon: They had a height chart so we could see how big we were, and sometimes when you're fighting, like, a really big alien, they would be like, "No, he's much bigger than that." But there's nothing really around you to give you any kind of cue.

Rogen: I would get naked and paint my body blue every time, with an eye patch. It was the only way I could do it. I wish there was another way.

In general, is playing an animated character a different process in terms of developing your role, given the fact that you're only able to be expressive with your voice rather than your physicality?

Rogen: I think one of the things I liked was you can actually slowly develop the character throughout the process a lot more. When you're shooting a live-action movie, you kind of have to know what you're doing by the time you show up on set, or else the stuff you're shooting first won't match the rest of the movie, and you've essentially failed. But with a movie like this, you can get halfway through the process and go, "Oh! If I was doing it like this the whole time it would have been a lot funnier." And they'll be like, well, in three hours we can re-record everything you've done up until now. So that's what I like about it, that it's a very fluid process. [If] you stumble across a funnier way of doing something halfway through, you haven't ruined anything; you can literally just go back and redo what you've done. To me it was nice because it wasn't as much of a commitment every time. You could kind of try things out, and they would test it out and see what worked.