Battlestar: Blood and Chrome to debut as web series Nov. 9

It's been in the works for a while, and now we finally know when and how we'll get to see the eagerly anticipated Battlestar Galactica prequel Blood and Chrome. So what's up?

The series will first roll out as a 10-episode web series on Machinima, broken up into 7-12 minute installments. If Machinima sound familiar, it should, as it was also home to the epic Mortal Kombat web series Legacy. The first episode goes live late this week on Friday, Nov. 9, with the rest breaking out over the next four weeks.

But that's not all.

A two-hour movie version of Blood and Chrome will also air on Syfy in early 2013, followed by an unrated DVD release that will hit shelves soon after that. 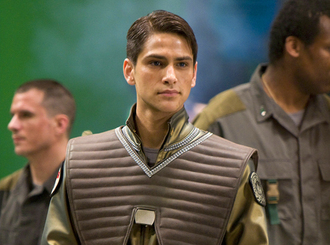 Story-wise, the webisodes will follow young William Adama (Luke Pasqualino) during the first Cylon war. Young Adama will serve on the top-of-the-line (at the time) Battlestar Galactica, where he butts head with his co-pilot officer Coker (Ben Cotton).

"With its top-notch storytelling, pulse-pounding action, and cutting-edge visual effects, Blood & Chrome is the perfect extension of the Battlestar Galactica universe. We are thrilled to see this hotly-anticipated event premiere on Machinima, an online network that is unparalleled in its delivery of high-class digital content to millions of viewers."

Oh yeah, and an action-packed new trailer for the web series has also been released. Check it out below:

So what do you think? Are you glad to see Blood and Chrome hitting the web so soon?