Remember that Joss-less Buffy movie? It's deader than a staked vamp

No one was really thrilled when Fox announced they were going to reboot Joss Whedon's Buffy the Vampire Slayer as a feature film without Joss Whedon's participation—no one save the screenwriter who landed the gig. Now we can all breathe a sigh of relief, as this NuBuffy seems destined for the Development Hellmouth.

According to The L.A. Times' Geoff Boucher, who runs their Hero Complex blog, writer Whit Anderson delivered the script for her attempted reboot of Buffy Summers and her world-saving crew and it has been received less than favorably: 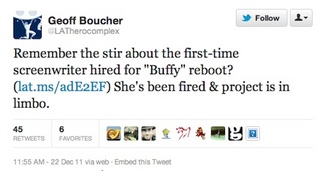 When asked if he could elaborate, Boucher responded thusly:

Listen, as much as we're glad this project has stalled, it's not because we wish Anderson any ill. She was faced with the unenviable, Herculean task of revamping one of pop culture's greatest characters in the face of what must've been crippling fandom scorn and massive studio pressure ... without any help from the man who made Buffy relevant in the first place.

A Whedon-less reboot was a bad idea, from soup to nuts, and Anderson seems to have been the person designated to fall on her sword.

Maybe, post-Avengers, the money men will come to their senses and go straight to the source.