The new trailer for Resident Evil: Afterlife has gone live, below, after its debut at WonderCon yesterday, and today we've got a sneak peek from behind the scenes of the fourth installment of the zombie apocalypse franchise.

From the movie's set at Cinespace Film Studios in Toronto, where we were among a select group of reporters who got to watch filming and talk with the filmmakers last November, we learned a few things: (Spoilers ahead!)

♦The new film, shot in high-def 3-D with the same cameras used in Avatar, will be heavily influenced by the Resident Evil 5 video game, with Wesker as the main villain and brother-sister team Claire and Chris Redfield (Ali Larter and Wentworth Miller) joining Alice (Milla Jovovich).

♦Forget the crappy 3-D back conversion of Clash of the Titans; this film was conceived from the ground up as a 3-D feature, and it looks fabulous.

♦The new movie will feature new costumes, new locations and new music and will be more global in scope, with a story that ranges from Alaska to Japan to Los Angeles and onto a massive Umbrella Corp. ship.

♦There will be familiar creatures from the games, as well as some new ones, including underwater zombies, burrowing zombies and split-headed zombie dogs.

Following the report of our set visit is an edited Q&A with director Paul W.S. Anderson, who steps behind the camera again.

On a day in November of last year, we visited a set that was a giant white room with walls that appear to be braced steel, apparently aboard the Umbrella ship. There are vertical man-sized glass cylinder pods, as well as examination tables on which lie "bodies" of the undead in white jumpsuits. 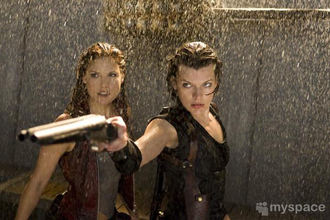 There's a giant white door at one end.

We're watching the action unfold on a high-def 3-D video monitor; the action is actually being shot in 3-D. "Wesker," played by Shawn Roberts, is in a chair, wearing a black Matrixy-looking outfit. His black profile pops against the stark white background.

In the shot, Wesker dodges something thrown at him (knives, which will be inserted in post-production) by Alice (Jovovich).

In another scene, we watch a fight scene between Bennett (a henchman played by Kim Coates) and Alice. In one shot, Coates—who is dressed in a battered black suit —trains a pistol on Alice. Alice does a roundhouse kick to knock the gun out of Bennett's hand, then kicks him square in the chest.

After one take, Coates shakes his hand: Jovovich has apparently kicked his hand instead of the gun. "That was just the finger," he says with a smile.

In another take, she misses the gun and hand entirely. "I missed the gun. ... It was too high. ... Can you hold it a little higher?" She laughs good-naturedly.

In another take, she nails both the gun and Coates square in the chest. After the cut, she flashes that big famous smile.

Another scene: Jovovich has to act as if snarling vicious zombie dogs have just entered the room, ready to attack. They're not really there, but she acts as if they are: She freezes, backs up slowly, a sharp intake of breath, a narrowing of the eyes, looking around, primed, then quickly dodges to the left, as if something has leaped at her, and quickly runs out of frame.

Later, as a lighting reference for the visual-effects guys, crew members bring in models of the dogs themselves and place them in the white room, then move them around. The zombie dogs are black and bloody, and their heads split open vertically to reveal large ranks of nasty teeth.

To lampoon this activity, Jovovich later brings in a small piece of plastic dog poop, places it on the floor, then moves it around. The crew laughs heartily.

We also toured the art department, where we saw concept sketches and designs of the various locations and props in the movie, as well as the props themselves, including shiny bladed weapons in a leather wrap and a mockup of an Umbrella Corp. nuclear weapon. 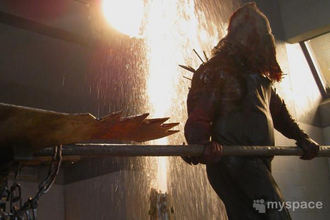 Paul W.S. Anderson, talk about coming back to this franchise as a director and what you brought you back and what you want to do with it that's different.

Anderson: I never really thought I went away, because I've written all of the movies, and I've produced them all and certainly provided services above and beyond the average producer on two and three. I was on set most of the films and called "action" and "cut" a lot of times and did all that good stuff. And so I was excited about the fourth movie, I guess, conceptually, because what I felt we should do with it, we should try to make it a conceptual jump, like Terminator did [with] T2. It was still the Terminator franchise, but it was something kind of bigger and grander. That was our idea with this Resident Evil, to make that kind of conceptual jump. It will still be Resident Evil, it will have all the really cool Resident Evil things in it—the characters from the game, the dogs that you've seen—but, you know, the dogs on a new level. These dogs are a massive improvement on the dogs before. I think some of the sets we're building, the locations we're using, are giant. Again, like a big conceptual jump to try and make the movie kind of a bigger and grander event than the first trilogy was.

Was there a particular game? It seems like there's an aura of Resident Evil 5 over this one.

I kind of knew they would tell me that Wesker was in the game, kind of, but they would never really confirm it. And, sure enough, he was the main villain. He was the main villain in the movie as well. And completely by coincidence, a large chunk of this movie takes place on a big ship, and there was the ship from Resident Evil 5. We had the dogs in already. We had an awful lot of stuff that they had already put into Resident Evil 5, so what I did was, I just did a whole big pass on the script to kind of bring it more in line with the imagery of the latest game, because I thought the latest game was fantastic. ...

There's a whole fight scene that we're about to shoot that we start next week with Ali Larter and Wentworth Miller, which is taken almost—well, is taken—shot by shot from Resident Evil 5. ... 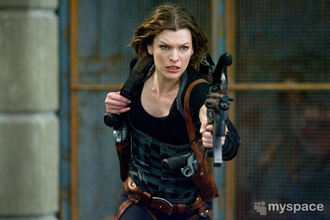 What's great in the game is it's one continuous shot, where the camera rotates around Wesker fighting the two, and he just kicks their asses. But they never cut, which of course you can do in animation. It's a bit more difficult in live action. So what we're going to do is we're probably going to shoot the fight in 10 different segments and then seam it together in visual effects so the finished effect will be as though the camera never stops rotating around.

It's really cool, because you go around them and then you kind of go underneath. It's going to be a nightmare, and everyone's tearing their hair out on set trying to figure out how to do it, especially with the 3-D rigs, which are huge. You've probably noticed that.

It's a very different experience shooting in 3-D, because the camera rigs are so large. Everything we've become accustomed to in the last 10 years as filmmakers, which is cameras getting smaller and smaller and you can just throw them on your shoulder and stick them in a car and do whatever you want, you can't do any of that now. You're forced to put things on dollies and track and cranes. It's kind of like a throwback to an old-school way of filmmaking. So for this kind of very flexible shoot, we're having to reinvent the wheel a little bit.

In terms of the story, how do you re-conceptualize the Resident Evil movie for 3-D with this change in the way you have to shoot it?

Exclusive: Ali Larter on her 'emotional' goodbye to Resident Evil in The Final Chapter
Revisiting Niki Sanders, one of Heroes' most underappreciated characters

Anderson: I wrote a script that I felt kind of emphasized depth, because I think that's very suitable to 3-D, obviously. But I kind of feel like I've always directed movies a little like they were ride films anyway. ...