Oh, my Smallville. Look what you have in store for us as the ninth season launches the last few episodes of this super series! It's "Checkmate" for Tess, Metallo gets resurrected, Tess and Chloe deal with sacrifice, Zod has a secret, and love is in the air!

On tonight's episode, "Checkmate," Tess Mercer's life is about to get a lot more challenging. In fact, we'll find out more about Agent Mercer of Checkmate. "That will be the next step in that chapter, and then that will play out in through the rest of the season as well," said executive producer Kelly Souder. "Tess' life is going to get very complicated. Now she's in between superheroes, Kandorians and Checkmate."

Pam Grier returns as the head of Checkmate, Amanda Waller. According to Souders, we'll get to see more of what's going on behind the scenes when it comes to the organization. And look for Phil Morris to reprise his role as John Jones.

But Tess (Cassidy Freeman) isn't the only character who will face some challenges in the final episodes. In next week's "Upgrade," Brian Austin Green will return as John Corben, aka Metallo, said Souders. "He gets resurrected. We'll get to see some of the relationship he had with Lois pick up again. So you will get to see the two of them together and how that evolves." We're thinking ... probably not so good. 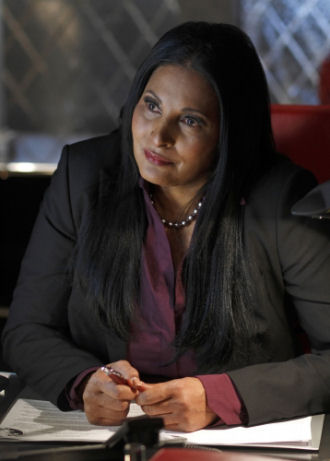 And coming up in "Sacrifice," "we will see Tess and Chloe go head to head," she said. "What is interesting when we were working on that episode is we sat down and really started thinking about these two women and started drawing so many parallels between them. They're really similar, because they've sacrificed so much for their belief systems. They've made a lot of personal sacrifices, and we're not really sure whose sacrifices are going to pay off in the end."

One element that will pay off for Chloe (Allison Mack), at least for a while, is her relationship with Oliver Queen (Justin Hartley). "They have a very nice chemistry on screen, and that was noticed. You definitely get to see the two of them have a nice arc at the end of this run. Chloe is hopefully going to end on the winning team in love for the first time," said Souders with a laugh. "I won't make any promises that it won't be complicated, but ... they're really fun to watch on screen, and they have a connection that neither of them have with anyone else, even like with Lois or Clark, who are the other two main characters in their lives. The two of them have a lot more to bond over."

And speaking of Lois (Erica Durance) and Clark (Tom Welling), Souders will only say that "their relationship will keep evolving up until the very last second of the season finale."

As for this year's May 14 season finale, "Salvation," what else could you expect except cliffhangers, especially since the series has been picked up by The CW for a 10th season? This year's finale "is going to bring all of our characters on a new playing field as far as relationships go or their position in the mythology," said Souders. "Clark takes on the bigger hero mantle in it. That's definitely an evolution in his journey to being the Superman that we love."

One other thing: According to EW.com, Justice League and Justice Society members will pop up in the finale, including the Black Canary (Stargate Universe's Alaina Huffman), Cyborg (Lee Thompson Young), Hawkman (Stargate SG-1's Michael Shanks) and Stargirl (Britt Irvin).