If Battlestar Galactica: Blood & Chrome's Lt. Coker Fasjovik seems a touch familiar, it's because his DNA might just have a hint of a very significant character from Battlestar Galactica, according to executive producer David Eick and actor Ben Cotton, who plays the battle-weary Coker.

The web series, which premiered the final two episodes of its 10 episodes on MachinimaPrime yesterday, follows a young William Adama (Luke Pasqualino) and his co-pilot Coker as they find themselves on a mysterious mission deep in Cylon territory.

So what character is the cranky co-pilot based on?

Eick originally planned to tell the start of a major Battlestar Galactica bromance, until the original Syfy show's timeline got in the way.

"It was all about how this broken heart, this betrayal, this woman that Adama loved, was buffered by an even deeper love. And that was for his best friend," said Eick, who along with Cotton gave an exclusive interview to Blastr. "At the time, the idea was to make a young Adama and young Tigh. And then, of course, because I'm always stupid and forgetful about the mythology and the history that we've established on Battlestar ... I get dumb about it. Like, when did Adama and Tigh meet? Oh, that's right, it was after the first Cylon war. Oh s--t. It's not the kind of thing I'm good at keeping in my mind. So I developed this entire story."

And then when he brought his writers in, Michael Taylor, Bradley Thompson and David Weddle quickly pointed out that the story was set before Adama and Tigh could have met. 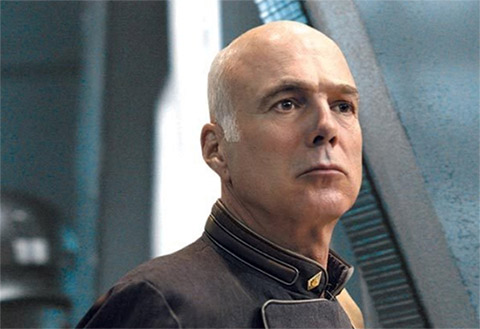 "We couldn't use Tigh, so we had to come up with this other idea. And for a long time#&8212;and even now I think hopefully for the Battlestar audience—the sense you might get is that Adama's relationship with his best friend in this story is a precursor to the relationship he'll one day have with Tigh. That Adama will always have his wingman. He'll always have the man whose relationship means more to him than a relationship with a woman or even his own children. And as we see played out in the Battlestar series, that's really true. That on some level, he views that kind of loyalty which can't rely on blood and can't rely sex, but is instead forged out of battle and shared experience as being the more dependable and longer-term love," said Eick.

"And it's what David and Bradley call the Peckinpah romance. Sam Peckinpah. The famous film director. The Peckinpah romance that the story would also become how Adama's love for a woman who betrayed him was ... that the only way he was able to survive that betrayal was through his bromance with his best friend. So that really began to give this story shape, and we found a way to do it without Tigh. And from there on we broke the story together and Michael Taylor went off and wrote a beautiful, amazing script," he said.

Actor Ben Cotton, who plays Coker, agrees that there just might be a hint of Tigh in his character. "I think so. I think they would sit down and enjoy a conversation with one another. I saw some similarity there, yeah. I think they're kind of cut from the same cloth. ... I like that we saw, again, a version of that person in Adama's life that came early on and made me realize how he's learned to deal later on with Tigh. Because he's had experience with people like that in a close way," he said.

Coker is "really grumpy, and he's really tired, but he cares. I think he really cares for the kid and for everything, really. I don't know. I saw him as being sort of an emotional guy, which is why he's so hard on everyone. But I really like him," said Cotton.

"Something that I've enjoyed about Coker, I thought there was more room in Coker to explore the idea of having the opposites in place for him. Meaning on the surface, maybe to Adama or the people around him, he's so abrasive and he's a little short-tempered and grumpy. But I think it's always fun to find where the opposite lies in that character. What does he love, or where does he soften up? And the script gave the opportunity to explore that. You don't get that every time you work. Often you're playing a character that's really supporting another, and their story doesn't get explored that far," he said.

As to whether there's a future for Adama and Coker beyond this first series, time will tell. "I don't have an answer on that. I don't know. I know there's talk where people have talked about wanting to do more of a series, but I haven't really heard of anything concrete about that," said Cotton.

"There's all kinds of places that I think it could go. I thought that the relationship that we set up between Coker and Adama was something that ... I'd like to see them go at each other a little more. I think there's a lot to explore there."

You can check out all 10 episodes on MachinimaPrime. And in early 2013, a two-hour movie version of Blood & Chrome will air on Syfy, followed by an unrated DVD release.

Here's the first episode of the web series:

What do you think of Battlestar Galactica: Blood & Chrome?