Revealed: The real-life drama behind Back to the Future

Tag: Back to the Future
Tag: Crispin Glover

"Hey you, get your damn hands off her." Those classic words were memorably spoken by George McFly before he laid out Biff Tannen in the classic ending to one of the most beloved films of the '80s, Back to the Future.

Crispin Glover will forever be synonymous with George McFly, despite the fact that he played the character only once and did not return for the sequels. In fact, the circumstances as to what exactly happened and why Glover did not return have been cause for some debate in the ensuing years.

If not for Eddie Van Halen, Marty McFly wouldn't have existed at all
Important Toy News: Buy a Back to the Future DeLorean model kit for the price of an actual car

What we do know is that Glover was ultimately replaced by lookalike Jeffrey Weissman, who donned prosthetics and sunglasses to fool audiences into thinking Glover was again playing the role. Unamused by the stunt, Glover sued the producers and won a settlement, leading to a new set of rules for the Screen Actors Guild in regard to illicit use of actors.

Although the situation was apparently laid to rest some 20-plus years ago, recent comments by BTTF co-writer and producer Bob Gale have irked Glover, prompting the actor to break his longtime silence in regard to the situation.

"On the DVD to the Back to the Future trilogy, Bob Gale has said something that's totally fabricated," Glover told a group of reporters at this weekend's press junket for Hot Tub Time Machine. "He said I asked for twice the amount of money that Michael J. Fox asked for in the first film. In the negotiation for the second film, they offered me less than half of what any of the actors that were being asked to come back in the film—Michael J. Fox, Christopher Lloyd, Lea Thompson and Tom Wilson. They had all done studio films, and they'd made a lot more money. I was being penalized."

The actor adds that his notorious visit to the David Letterman show, in which he appeared in character as Rubin from the forthcoming film Rubin and Ed, may have added to the situation. "It was very apparent to me when we were doing the negotiations that I was not wanted," said Glover. "If I was going to do it, it was essentially a punishment. I was going to have to take less than half of what anybody else was going to take to come back to the film. It was not a normal negotiation. It seemed to me that there was an aggressive quality toward the negotiations." 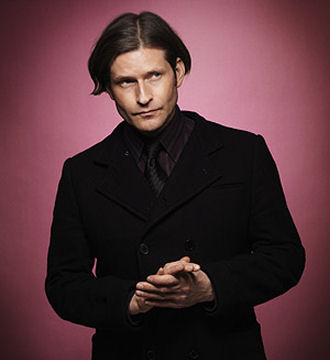 In the years since, Glover has made amends with BTTF director Robert Zemeckis, returning to play Grendel in the director's 2007 film Beowulf. But Bob Gale is another story. In addition to the DVD comments, Glover says that the writer/producer made similar comments in recent radio interviews. "I've talked about it very little, but I'm starting to talk about it," Glover added. "I just feel like I can be totally quiet about it and people [can] think that I've done this kind of wrong thing or I can tell the truth of what has happened. [Gale] did not address that what they did was totally immoral and illegal and just wrong. [They] put another actor into false nose, chin and cheekbones in order to fool people into believing that I was in the film."

While Glover says he is proud of the work he did on BTTF, for him it remains tainted in many ways. Besides the legal issues that arose from the sequels, the actor had to deal with the replacement of the film's leading man after a majority of the film had already been shot. (Fox famously replaced Eric Stoltz as Marty McFly; Stoltz can now be seen as Daniel Graystone on Syfy's Caprica.)

"People often ask me, 'Oh, was that a fun film to make?'" Glover said with a laugh. "I'd shot most of my scenes with Eric Stoltz. It was not known [that Stoltz wasn't working out], and it was surprising. I'd worked with Eric Stoltz before. We'd done a Bayer aspirin commercial. We played brothers. I'd known him a bit, and I liked him. I thought he was a good actor. You know, if you shoot a number of months, and then in the middle of the shooting there's a large replacement like that, it's unnerving."

Glover added: "Working on Back to the Future was, you know, I don't like to get into too much detail, because I probably should write about it at some point and time. But I'm very glad I'm in the film. Ultimately, I had a good working experience with Robert Zemeckis working on that movie. Good things happened in it, and I'm glad I'm in the film."

What do you think of this behind-the-scenes drama?

For the latest sci-fi news, follow us on Twitter at @scifiwire
Tag: Back to the Future
Tag: Crispin Glover
Close Search Return to SYFY homepage.