Review: Hot Tub Time Machine has a great title, but ...

And I thought being a movie reviewer for SCI FI Wire would be great. Free movies, a few bucks and a lot of the films I probably would have gone to see anyway if only to chat about them with other geeks. Then came the order from on high: Hot Tub Time Machine. Great.

But, no, actually. Awful.

Hot Tub Time Machine does have one thing going for it: its title. We don't need a nation of critics marching off to press screenings and then coming back to their computers to document the atrocities after all. Instead, take this simple test: Do the words "hot tub time machine" all in a row like that make you giggle or smile or even feel a little bit happy?

You'll enjoy the film. You might also enjoy it when your mommy digs her car keys out of her pocketbook and jingles them in front of your face while saying, "Who's a good baby? It's yooooou!"

Or do you, like me, instantly start wondering how such a weak concept can keep a feature film afloat? Then you won't like Hot Tub Time Machine. If you're in the first camp, don't sweat anything I have to say. Feel free to click at anything in your browser window that might be blinking or spinning.

In the grim meathook future of Hot Tub Time Machine, a man named Lou (Rob Corddry, Harold & Kumar Escape From Guantanamo Bay, with both his volume and his IQ set to 11) is middle-aged, self-destructive and even suicidal. To cheer him up, everydude Adam (John Cusack IS John Cusack in every '80s movie ever) and emasculated dog groomer Nick (The Office's Craig Robinson as a guy who works at a place called 'Sup, Dawg?) take Lou to a ski resort. Along for the ride is Stargate fanfic author and general chubster Jacob (Clark Duke, who needs a wedgie) to make the sci-fi bits of the film explicable to the audience. 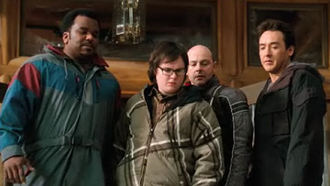 And then they go back, via hot tub (it doesn't matter how, trust me) to 1986, where they must re-enact an evening from that era exactly or they'll never return to their own time and Jacob—who is 20 years old in 2010 but was conceived in '86? Gee, I guess it took a while for this turkey to get green-lighted—will never be born. Oh no! If only Jacob had a copy of the script in his pocket too, then I'd have had something to root for.

If you've seen the trailer, you've seen most of the amusing jokes. The 30 seconds' or so worth. Hot Tub Time Machine saves most of its alleged humor for the paying crowd, though. Marvel at the projectile vomit! Revel in the dog crap! Hoot along with the threat of forcing oral sex at gunpoint! Aw, don't worry, as long as it's dudes and one of them is a black man with a large member, near-rape is totally funny. Hot Tub Time Machine, hee hee, what a funny little title. Am I right? We're still bros, right?

There's been a run of raunchy comedies featuring the sorts of characters who in generations past would have been shoved into lockers as part of the subplot, but today they are the protagonists. And that's fine as far as it goes. Films like Superbad and The Hangover were quite funny and in the end didn't forget the essential humanity of their characters. They couldn't forget, because those films were about their characters. 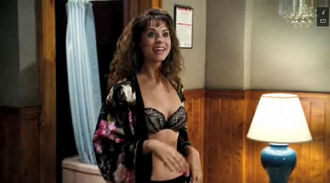 But Hot Tub Time Machine is about its tired science fictional concept, and when it exhausts its three minutes' worth of concept—think of it as a 12:55 a.m. Saturday Night Live sketch—all the film has left is scatology, anti-gay sentiment and 1980s trivia. Hey, remember Manimal? How about Red Dawn? But I cannot bring myself to care about any of the characters, and the actors have nothing to work with.

Lou is such a hateful little rat that we really don't care whether he lives or dies. Corddry doesn't so much act as rave and rant his lines, perhaps hoping that if he shouts and barks the movie will be over sooner. It may have been for him, but not for me. Cusack can be a good actor and has a warm screen presence, generally speaking, but one can only guess that he took on the role because he's one of the film's producers. Craig Robinson has nothing to even do, as Nick is just a bundle of cliches. Did you know that black people are good singers too? They are! The brief appearance by Chevy Chase as the hot tub repairman is a bright spot, but not much of one. If only he'd held everyone's heads underwater. Next time, please just waterboard me.