Robert Rodriguez may be the hardest-working man in show business—but not in Hollywood: After establishing Troublemaker Studios in Austin, Texas, more than a decade ago, he quickly amassed an impressive resume as a writer, producer, director, composer and editor.

Even with so many different challenges pulling at him these days, however, Rodriguez said that he is currently focusing his attention on making just one movie, even if he's promoting another at the same time: Machete.

Danny Trejo wants to make Machete Kills in Space so much, he would just direct it himself
News briefs: Denisof in Dollhouse, Machete cast

"Probably Machete, because I just shot week one of that," Rodriguez told reporters over the weekend in Los Angeles while promoting his upcoming family movie Shorts. "Next week, we shoot some more."

Shorts, needless to say, is dramatically different from Machete, which expands on the fake trailer of the same name he created for 2007's Grindhouse, about a vengeance-seeking former Mexican Federale and day laborer.

The writer-director said he's making terrific progress, thanks in no small part to the film's aggressive shooting schedule. "It was amazing," Rodriguez said of the first week's dailies. "It's going really good. That's the shortest film schedule since El Mariachi. Mariachi was a 14-day shoot, Desperado was a 35-day shoot, and this is about half of the time we had on Shorts, which was a really short shoot—around 42 days. So you have to make quick decisions, and it comes out better. The energy is much better." 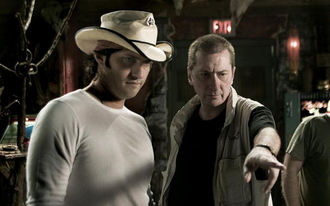 Rodriguez was reluctant to divulge too many details about the plot, but he indicated that the original preview was indeed just a taste of what the feature film would have in it.

"He does so much crazy stuff now," Rodriguez said. "I just wanted to live up to the trailer, and it's far surpassed the trailer. So if you like the trailer, you're going to love [the movie]. The movie's got an insane cast. I can't tell you too much."