While we're still eagerly waiting for J.J. Abrams' Star Trek 2 (or XII, if you prefer) to start filming, writer Roberto Orci, who's known to pop up occasionally on discussion boards and tackle fan questions, has recently hinted that we could be seeing the Enterprise's former Captain—Christopher Pike — on the next film.

It was during a little exchange on Trek Movie that Orci dropped a few ''hints'' that Trek fans may be seeing more of now Admiral Christopher Pike, played by the always awesome Bruce Greenwood.

Here's the exchange in question: 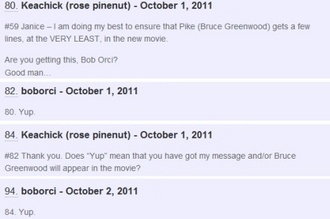 TrekMovie editor, Anthony Pascale, then added in the article:

Of course Orci could just be saying he was listening, but not actually confirming that Greenwood has made it into the film. For his part, Greenwood has made no secret that he wants to come back and has even proclaimed that Pike is "essential."

If you guys recall, about a year ago, Bruce Greenwood had sounded off on the importance of Pike on Star Trek and even proposed that the character should have his own spin-off.

That'll probably never happen, but the idea of having Christopher Pike (and Greenwood) back for the next Star Trek film sounds just about pretty good—and logical—to us. How about you?