B-movie master and new Oscar honoree Roger Corman is on a roll. The legendary producer will unleash Dinoshark this Saturday on Syfy, and it'll be followed soon after by Sharktopus and—are you ready?—Dinocroc vs. Supergator and possibly even Dinoshark vs. Sharktopus. The trick, Corman explained during a recent exclusive interview, is to know just how far to extend a franchise.

"The chances are 100 percent that you will get Dinocroc vs. Supergator, putting together the first two," Corman said. "That we know; we're working on that right now. If people like it, we'll probably do Dinoshark vs. Sharktopus. Now, there is such a thing as playing a cycle too long. You have to know when to step away."

Corman cites as examples his Carnosaur epics, which pre-dated Jurassic Park and were huge moneymakers for his production company, New Horizons—at least initially.

"We had a giant return on Carnosaur," the producer said. "We did Carnosaur 2 and Carnosaur 3, and the profits were still there, but dropping with each one. We went to Carnosaur 5, and we still had a profit, but our profit had steadily diminished. When I saw grosses on Carnosaur 5, which gave us a nice, pleasant profit, but nothing great, I said, 'That's the end of Carnosaur,' because I could predict that we'd either only break even or lose money if we did more. So I don't know how far we'll go on this cycle with Dinocroc, Supergator, Dinoshark and Sharktopus. The trick is to go far enough without going too far."

In terms of going far enough without going too far when it comes to a film's story, Corman can brilliantly sell that one, too. Dinoshark, he argued, made sense: Prehistoric dinoshark sperm got trapped in ice. The ice melts after a gazillion years and, voila, dinoshark attacks. Not ridiculously out of the realm of possibility. Sharktopus, however, required something more in its story-breaking session—especially since Syfy executives came up with the title and asked Corman to crank out a movie. Try to keep up with Mr. Corman, who's still sharp as a tack and a super salesman at 83. 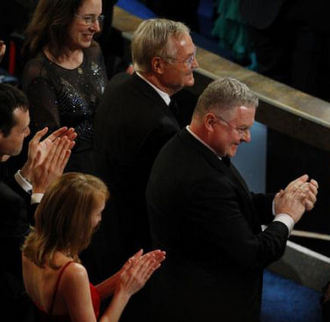 Syfy then came up with Sharktopus.

"They liked the title," Corman said. "I wasn't so certain about the title, but they talked me into it, and I said, 'OK.' The logic you can go with is that if there's a shark today, there had to be a prehistoric shark. But there is no such thing as a half-shark and half-octopus. I was faced with an entirely different problem, because, as I say, there was some sort of insane logic to the first three. So I had to come up with an idea that would make sense, and I felt, 'OK, now we have to go into bioengineering. The sharktopus has to be created. This can no longer be just the later development of a prehistoric creature.'"

Corman's solution? He whipped up a fictional company called Blue Water, a bio-engineering outfit hired by the Navy because the Navy has a major problem on its hands.

"There are Somali pirates or terrorists operating in local waters in small boats," Corman said. "The Navy has the assignment to wipe out these Somali pirates and/or destroy the boats of these terrorists, but they cannot send in a Navy ship, because that would be a violation of territorial waters. But they've got to get these guys. So Blue Water has been given the assignment to create a super-deadly but controllable—through electronic implants in its brain—creature that's half-shark and half-octopus and can go in the waters where we're not supposed to be."

Say it with us now: Sharktopus.

"The creature can use its tentacles to grab the boat and overturn it, and the shark eats the pirates or the terrorists," Corman said. "Now, that was my solution. And it almost makes sense. Clearly, it doesn't not make sense, but there's that willing suspension of disbelief. If someone has turned on Sharktopus, they want to see Sharktopus, but they want some explanation as to how this thing was created. That was my solution, and that's what we're doing. So those Somali pirates had better be very careful in the next few months."

Sharktopus is in production now in Puerto Vallarta, Mexico, with Eric Roberts as its star. Look for Sharktopus to air later this year on Syfy.