Rumor of the Day: An Avenger to appear in Guardians of the Galaxy?

Marvel's Cinematic Universe is filled with crossovers. They're part of the studio's winning formula. So we're not surprised by this latest rumor. Could a certain Avenger appear in the upcoming Guardians of the Galaxy?

While at New York Comic Con, Marvel debuted the cover to the new Guardians of the Galaxy comic. It featured an appearance by Iron Man, which had people wondering about his connection to the movie. Now unconfirmed reports claim that Marvel does have plans for an Iron Man cameo.

Apparently, an issue of Avengers Assemble (#8) adds fuel to the fire. On one page, Stark's actually asked to join the Guardians. He contemplates the decision ("I do owe myself a vacation"), before the cliffhanger ending.

You can view part of the exchange below. 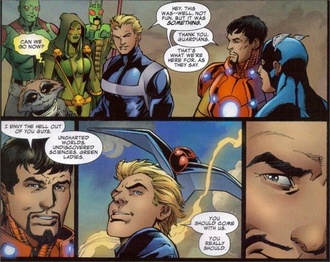 As we said, this is an unconfirmed rumor. What's done in the comics doesn't necessarily translate to screen. But if it's true, how would that work? Guardians opens Aug. 1, 2014, while The Avengers 2 is released May 1, 2015. Perhaps Iron Man could be the bridge?