Rumor of the Day: Olivia Wilde is the new Lara Croft

Someone in Hollywood must have done the math and realized that the videogame series Tomb Raider hasn't produced a big-budget movie since Tomb Raider: Cradle of Life, all the way back in 2003. Eight whole years without a Lara Croft movie? It's reboot time!

Evidence is thin on the ground, but rumor has it that Olivia Wilde may be stepping into the role of our favorite female archaeologist.

A source close to the project said "This would be a far darker and more serious Tomb Raider movie, the idea is to get a top director and an intelligent script and make this an empowering character for women as well as a popular one with men. Olivia is just one of the names being suggested for the lead role. She would appear to be ideal."

Photos of Olivia Wilde have surfaced showing her dressed in Lara's signature fingerless gloves and gun holster, but ComicBookMovie says these stills have come from the set of television show House, where she plays the enigmatic Dr. Remy Hadley (known to her boss as "Thirteen"). (See below.)

Still, with her looks and ability to handle herself in a fake fight—she played Quorra in Tron: Legacy and has a role in the upcoming Cowboys & Aliens—Wilde has what it takes to play the athletic Lara.

Besides, it makes economic sense to cast her. Although we don't have the figures on how much Wilde earns per movie, it's clearly less than former Lara Croft, Angelina Jolie ... aka the woman who charged $20 million to appear in Salt. 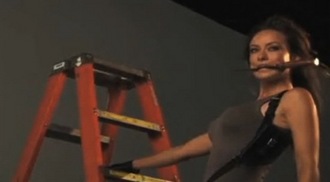 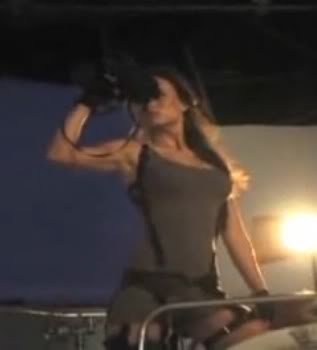 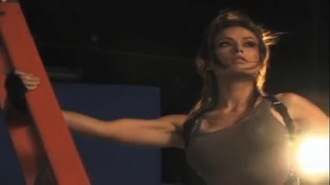