Salman Rushdie talks eruditely about Superman—and gets it wrong

Salman Rushdie, awarded a knighthood as part of the Queen's Birthday Honors for his services to literature.

He may think he is, but based on a recent TV appearance ... not so much.

While on the Late Late Show With Craig Ferguson to discuss his novel The Enchantress of Florence, Rushdie revealed that he'd been asked to write a graphic novel.

"When I was a kid, I was a real comic-book nut," he said. "I can tell you a lot about superheroes."

So far, so good. But check out what happened when Rushdie attempted to share some of his knowledge, starting at 8:53 in the following clip—and then join us below to see where he got it all wrong.

"What's the difference between green kryptonite and red kryptonite?" Rushdie asked rhetorically, and then answered:

Actually, it's green kryptonite that can kill, after first causing excruciating pain, while it's gold kryptonite that takes away a Kryptonian's superpowers, making him like you or me. If you don't believe us, check out this handy guide plucked from the pages of a DC comic: 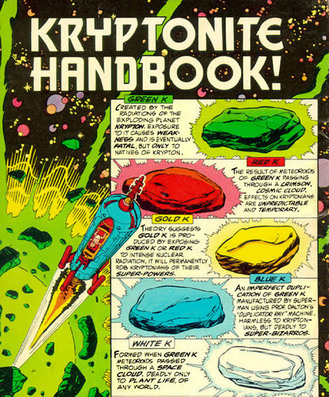 And as for red kryptonite, rather than killing Kryptonians, it causes them to undergo bizarre changes for 24-48 hours, with no two transformations alike. Over the decades, Superman has been turned into a giant, a dwarf, a dragon ... and has even (in perhaps the weirdest red kryptonite effect of them all) been given the head of an ant, as you can see from the 1963 Action Comics cover below.

So, Sir Salman, while we're thrilled you're willing to come out as a comic-book fan—before you start scripting that The Supermanic Verses graphic novel, we suggest you haul out those back issues and reacquaint yourself with the details first!