In part two of our Drag Me to Hell report, we talk exclusively with director Sam Raimi about his return to the horror genre that made him famous.

In the movie, Christine Brown (Alison Lohman) is an ambitious L.A. loan officer with a charming boyfriend, professor Clay Dalton (Justin Long). To advance her career, she makes a fateful decision against an old woman (Lorna Raver) seeking a mortgage extension. In retaliation, the old woman places a powerful curse on Christine, transforming her life into a living hell.

Following is an edited version of our exclusive interview with Raimi. Drag Me to Hell opens May 29. (Spoilers ahead!)

Where did the idea for the film came from? It's an original story, right?

Raimi: Yes, it is. ... I'm not exactly sure where it came from. ... My brother, Ivan, and I were talking about different ideas and thought it would be fun to write a spooky picture. And more than that, though, it was just a desire—because we had been working on another project for so long—it was a desire to complete a project in a short amount of time. ... I was working on a picture called Darkman [in] 1989. And I was writing it with my brother, Ivan. We were writing it for so long; for over the course of a year it was in development at Universal. We just needed to clear our brains. ...

We wrote a short story, and that was the subject matter. ... That short story was what this film was based upon. ... And it stayed in that form for a number of years, until, probably about five years later, we decided to make a short screenplay out of that short story. ... So we turned it from a 30-page short story into about a 45-page screenplay. ... I think it was around 1994. ... And then, about around eight years later, we brought it back out and decided to make a screenplay, ... a feature-length screenplay, out of it. Around 2003, we expanded it into a 105-page screenplay. ...

It feels like a very old kind of story, like a story that's been told before, almost Old Testament, in a way, or kind of mythic. Were these the kinds of things you were going for when you and Ivan came up with it?

Raimi: No, I wouldn't say that. We didn't really have those goals in mind. We thought it would be fun to tell an old-fashioned kind of a ghost story, but we didn't really talk about it much in those terms. We just thought, we just kind of got the style in our heads and then began to work on what would happen to the character: What does she want? What new conflicts would she encounter? Could she overcome them, or would they overwhelm her? That's pretty much how we write. ...

This movie is sort of being talked about by fans as Sam Raimi's return to his horror roots. What do you think of that?

Raimi: I just want the audience to like it, whatever they. I have no opinion about that. Certainly I haven't been making a horror film since there was the Evil Dead trilogy.

I suppose they're right. This is the first horror film I've made since then. But ... I don't think of it in terms of myself or my career. ... What I think about is I hope the audience likes it, you know? Get scared about it. I don't think most people are aware who the filmmakers are, you know, the audience. I think they're just into it for a good time and a thrill show. ...

After directing all of these huge movies, such as the Spider-Man films, in the last several years, what was it like to go back to a relatively small production that was pretty quick, sort of working on the fly, for you? What was that like?

Raimi: It was very nice. I loved working with a much smaller crew. I really enjoy working in a much more intimate way with all the crew members. Much more hands-on and exciting to be on the set every single moment.

Were there things you brought with you from your experience with these huge films to this relatively small horror film that you might not have done previously had you not taken on these huge projects?

Raimi: I learned a lot from the big films that I had an opportunity to direct. Mostly about digital visual effects. And so I applied what I knew to those aspects of this picture that could afford those digital effects. Although there wasn't a tremendous amount compared to the big pictures. They're still somewhat expensive, or they can be, and they were limited. But ... everything I learned on the larger films I was able to apply here, and it helped quite a bit. 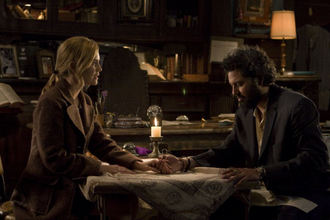 Talk about the casting and how you selected these actors.

Raimi: Well, Alison, I think, is just a great actor. She's such a sincere person in real life, and I think a lot of it comes across on screen. She's very likable in real life, and I really wanted someone in the lead role that the audience could relate to, and somebody they could identify with, because the screenplay does so many things to make the audience dislike her.

She's a sinner, you know? She acts selfishly. She's a liar. She's someone that tries to do anything she can to escape the responsibility of her decisions. In many pictures she'd be a villain. But we're just stuck with her, so she turns out to be the hero. But she really is the most guilty of all the people in the film, and so I wanted someone that the audience could identify with despite all of her shortcomings in her character. And Alison really has a very personable quality that I think enables the audience to connect with her. ...

You have David Paymer, Justin Long and Lorna Raver. Tell me about what they brought to the film.

Raimi: The whole group of actors were wonderful. They were like a sweet, warm, funny ensemble group. They were like a group of actors that you'd have in some dinner theater production, you know, even more professional than that, but that's how warm and how well they got along with one another. They're very supportive of me and each other and the movie, and, really, nothing was too much for them as far as what they would give to make the movie a little bit better. They really appreciated that team effort. That was very refreshing and like the old days, for me, of making lower-budget horror pictures.

I talked with Alison about some of the more physical things that she was called upon to do in this film, including being hung upside down and flung around that apartment, and she talked about the fight with Lorna in the car, in the garage, which I guess you shot over several days? Can you talk about some of the more challenging set pieces that you have in the film and what it was like to shoot those, and sort of the challenges that they presented you?

Raimi: Sometimes it's the ones that don't appear that difficult that are difficult to the filmmakers. In this case, one of the most difficult pieces that I had to work on was the train station at the end of the film.

It's a scene where Alison Lohman's character is going to meet Justin Long's character to finally spend this weekend after all the horrors are over in this lovely cabin in Santa Barbara. ...

The way I'd envisioned this train station just was completely unrealistic. I had assumed that you'd be up on these tall concrete platforms and that the trains would be on the tracks, many feet below these platforms, and that the level of the doors would just naturally come up, you know, 5 or 6 feet, to the platforms themselves. But when I got there the concrete platforms were about 5 inches above the train tracks, and I ... needed that tunnel, the semi tunnel that the train tracks were going to be in. More similar to the New York subways is how I had imagined it in my mind. ...

But if you really look at it, it's like the difference between standing on the curb and a road. ...

So you had to cheat that a little bit.

Raimi: Yes. ... I hope the audience doesn't see that it's an effect, but it always had to be faked, both in set pieces and in visual effects. ... A tremendous amount of fakery just to carry through a very simple point.