With the upcoming horror movie Drag Me to Hell, director Sam Raimi returns to the horror genre in which he first made a blood-spattery splash as a filmmaker, and SCI FI Wire was among a select group of journos on hand last June to watch the movie being made at 20th Century Fox's studios in Los Angeles. (This is the first of three set reports; look for parts two and three in the next couple of days.)

"It's kind of a medium [to] low-budget horror picture, and it's got some scares, and it's got a lot of fun stuff in it," Raimi said with typical modesty during a break in filming last June on a Fox soundstage. "You know, an old witchlike hag and just stuff that I enjoy in some types of horror pictures."

Here's how Universal Pictures (which is releasing the film) describes it: Christine Brown (Alison Lohman) is an ambitious L.A. loan officer with a charming boyfriend, professor Clay Dalton (Justin Long). Life is good until the mysterious Mrs. Ganush (Lorna Raver) arrives at the bank to beg for an extension on her home loan. Should Christine follow her instincts and give the old woman a break? Or should she deny the extension to impress her boss, Mr. Jacks (David Paymer) and get a leg up on a promotion? Christine fatefully chooses the latter, shaming Mrs. Ganush and dispossessing her of her home.

In retaliation, the old woman places the powerful curse of the Lamia on Christine, transforming her life into a living hell. Haunted by an evil spirit and misunderstood by a skeptical boyfriend, she seeks the aid of seer Rham Jas (Dileep Rao) to save her soul from eternal damnation.

"What I really liked about the script and Sam's process is it's not just a horror film, even though it is in that genre," Lohman said during a break. "It is primarily just a story of this regular, normal girl who is very happy in her life and just experiencing some really crazy things that are happening to her. ... I love that [Sam] brings a sense of humor to it, so it's not just a horror film; it has all of these different elements, and it's very layered."

Last June 5, we were on a set meant to represent the massive central room in a decaying Pasadena, Calif., mansion, the home of a medium played by Mexican actress Adriana Barraza. The room—a marbled circular chamber with four antechambers at each compass point—is the setting of a seance in which the medium will try to exorcise the Lamia tormenting Christine, with the help of Rham Jas and a fourth person.

The four are seated around a round table lit overhead by an old chandelier. Raimi, with a few days' beard growth and wearing a dark sport jacket over a T-shirt, calls out cues to the actors as the camera focuses on Lohman, who turns to look over her shoulder at something—a noise? a shadow?—coming up behind her.

There's also a white goat in the scene, next to the medium. The filmmakers will use a live goat in some scenes and an animatronic goat for others, but we won't give away the reason why.

In another take, he talks as Lohman turns to look over her shoulder (and directly into the camera), fear in her eyes. Raimi: "A little creak ... It moves off ... A little more frightened." 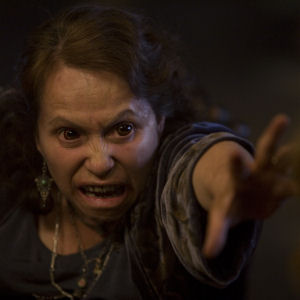 In another scene, the medium holds a knife, presses it to her forehead, kisses it. She talks to Christine, telling her that she will try to get the Lamia into the goat, and Christine must take the knife and ...

"Do you understand?" the medium intones. Christine speaks to Rham Jas: "What am I supposed to do?"

Rham Jas: "You must allow the dead in. ... You must say these words: 'I welcome the dead into my soul.' You must believe it."

Later, Raimi will explain why he enjoys doing a horror movie after much success with the Spider-Man franchise and such serious dramas as A Simple Plan and For Love of the Game. After all, it's been a long time since Raimi made a mark with his Evil Dead movies.

"I'm trying to make a horror movie that people go to, they laugh at, they think is suspenseful," Raimi said. "They get excited about ... the action, exciting monster sequences. They get scared. They go, 'Oh, gross,' and have those types of funhouse reactions. So it's a lower-brow goal that I really enjoy working in, this level. For me, it's a great weight off my shoulders."

Raimi added that the experiences he had on the big Hollywood movies have helped him relax while making this relatively small film. "The Spider-Man films are actually a tremendous amount of fun, but there's also a tremendous amount of responsibility, because they're expensive and the character is so beloved by so many people that you really have to be careful of what you're doing every moment," he said. "With a horror film that's an original piece, you really can just concentrate on making a blast. And you may fail, but at least there isn't all these other thoughts and concerns that you have to balance at the same time, so it's much more freeing, and you're really able to work with your team and create the best [movie] possible, with nothing else hindering you."