San Diego Comic-Con 2018: All the important panels, events, and stars

San Diego Comic-Con is rapidly approaching, so hopefully fans are getting prepped and making plans on what to do when they get there. But for those not attending or with a more-than-healthy sense of anticipation for the nerdy entertainment convention, it might be nice knowing exactly what's worth looking forward to.

So, we at SYFY WIRE have gathered up everything we know about what's on its way to SDCC 2018, from trailers to panels to cast appearances and awards. As the con gets closer, we'll be updating this list with even more goodies for fans to monitor if you're stuck somewhere besides sunny San Diego this July.

Here's what we know is on its way:

Aquaman is taking advantage of being the biggest superhero property on the horizon by debuting its trailer at SDCC this year.

The movie will likely be DC's big push at the con, though reports that Gal Gadot will unveil Wonder Woman 1984 footage would certainly blow the rumored trailer for Shazam! out of the water. With the universe's main competitor out of the running this year, it's the DCEU's time to shine. Hey, you can't spell "SDCC" without "DC."

Yes, that's right, Marvel won't be doing a big Hall H presentation as in years past, because after Infinity War, what could they do? Instead, their presence at the con will be focused on the ten-year anniversary of the film studio's launch and their copious TV offerings. Marvel’s Cloak & Dagger, Legion, The Gifted, Iron Fist, and Agents of S.H.I.E.L.D. are locks, while The Punisher and Daredevil panels are still in discussions. However, with Punisher star Jon Bernthal likely attending the fest anyways, it would make sense to grab him for an appearance. Marvel Rising, the upcoming animation franchise that Marvel hopes to launch, is also bringing out the voice talent so fans can meet the team for the first time.

The Walking Dead will have a panel appearance before its star exits during its ninth season - and the long-dead Shane might be back for the convention. Bernthal is rumored to be attending the con in support of his mysterious appearance during the show's upcoming season.

In other AMC news, its panels and those of the BBC will not be moderated by host Chris Hardwick as he undergoes scrutiny after abuse allegations. These panels will have their moderators replaced, but still go on.

One of those BBC panels is Doctor Who. In support of its newest season, new Doctor Jodie Whittaker joins co-stars Tosin Cole and Mandip Gill - along with showrunner Chris Chibnall and executive producer Matt Strevens — for a panel and Whittaker's first SDCC appearance. 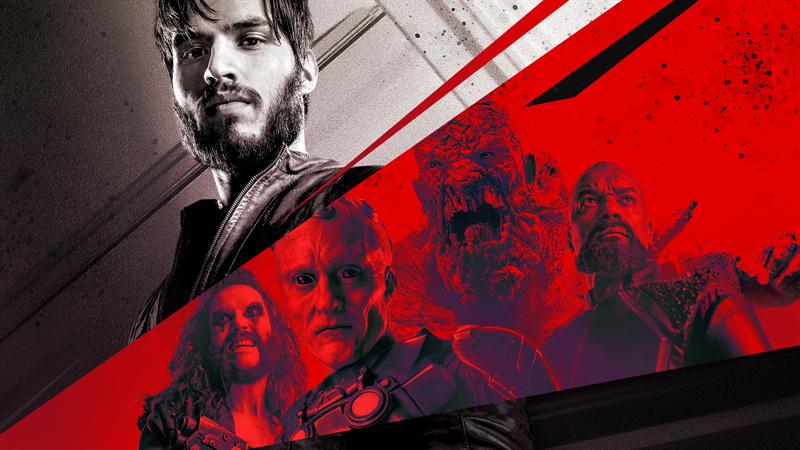 Tom Hardy's Venom and the incredible-looking animated film Spider-Man: Into the Spider-Verse will both have panel presences at SDCC 2018, letting Sony flex their superhero claim to fame while they still can.

According to Deadline, the entirety of Stephen King and J.J. Abrams' horror show Castle Rock's first episode will play at the con in addition to an extensive off-screen presence. While King and Abrams won't be at the con (the latter could Skype in), there will be a cast panel including Sissy Spacek, Bill Skarsgard, and Melanie Lynskey. The show sweeps wide over King's bibliography and will look to include a similarly immersive experience at SDCC this year.

King's work will also be felt at the Mr. Mercedes panel put on by AT&T, where some of the show's production team and cast will promote the second season. But there's also going to be an immersive VR experience linked to the show, which, if ever there was a creator to avoid a VR adaptation of, it'd be Stephen King.

While Netflix already has one of its Marvel shows confirmed for an appearance, its genre fare is wide-reaching. We're talking the monsters of Stranger Things, the zombies of Santa Clarita Diet, and the actual devil of its newly-acquired Lucifer. While the latter is the only confirmed appearance of the three so far, look for the streaming giant to max out its presence since Marvel and others are skipping the con. Animation-wise, long-running series Voltron Legendary Defender is getting its own panel.

One of the heavy-hitters skipping the convention is HBO. Citing "production schedules and air dates for Game of Thrones and Westworld" that simply don't work for SDCC 2018, the network's biggest genre offerings will be absent this year. Game of Thrones is entering its final season, while Westworld will have just wrapped its second - neither in a great position to tantalize fans.

In a release, Nickelodeon told SYFY WIRE that its panels will have plenty of genre goodness. Superheroic turtles and aliens will have their own panels in support of new series Rise of the Teenage Mutant Ninja Turtles and upcoming movie Invader Zim: Enter the Florpus, respectively.

In celebration of Star Wars: The Clone Wars' 10th anniversary, the animated show is getting a panel of its own to look back and appreciate one of the best Star Wars side stories ever aired.

The Halloween remake, from David Gordon Green and Danny McBride and featuring Jamie Lee Curtis, will be making an appearance at Hall H this year, according to Deadline. Deadline also clued us into the arrival of some early details about It: Chapter Two and the debut of extended clips of The Nun, which is the next installment in The Conjuring universe.

The third in M. Night Shyamalan's quasi-realistic superhero universe (including Unbreakable and Split) will have a presence at the convention. Glass (starring Samuel L. Jackson, Bruce Willis, James McAvoy and Sarah Paulson) follows Bruce Willis' character as he hunts down McAvoy's multi-personality antagonist from Split.

As far as throwbacks go, Demolition Man is getting a 25th anniversary pop-up focused on a futuristic and upscale Taco Bell dining experience. In the future, everything's a Taco Bell! In more serious news, George Takei-narrated sci-fi documentary From The Bridge will be unveiling clips featuring the likes of George Lucas, Gene Roddenbery, Leonard Nimoy, and more at its panel disussion.

Finally, aside from all the panels, conferences, and trailer debuts, there are plenty of awards being doled out. One of the most prestigious, the Bill Finger award, will be going to two women (the first time this has ever happened). Essential Wonder Woman voice Joye Hummel Murchison Kelly and the late, legendary DC editor Dorothy Roubicek Woolfolk will receive the comic award, which is joined by the Eisner Awards as SDCC's top honors.