SCI FI—which began as SCI FI Channel back in 1992—morphed into Syfy today, and the new branding initiative was launched this morning with the opening of the Syfy Imagination Park at Rockefeller Center in New York City. Syfy Imagination Park features computers, television screens, seating and interactive set pieces—including a giant View-Master and a super-sized lollipop—inspired by the two-minute Syfy brand film, "House of Imagination."

Home is where the haunt is in 'SurrealEstate': How to watch SYFY's new scripted series
SYFY's Van Helsing series finale 'Novissima Solis' calls upon our heroes to make the ultimate sacrifices

Josh Gates, host of Syfy's reality program Destination Truth, spoke briefly about Syfy before turning the microphone over to Dave Howe, Syfy's president. Howe offered additional details before introducing Eureka star Joe Morton, as well as Eddie McClintock and Joanne Kelly, stars of Warehouse 13, the first new series to debut under the Syfy banner. Cheers filled the air when it was revealed that Syfy will offer free "Wyfy by Syfy" at Rockefeller Center starting today and later this summer at other Manhattan pedestrian hot spots. 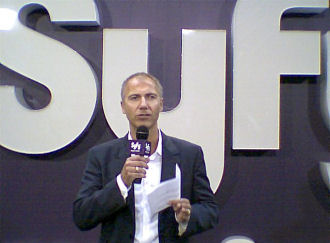 Following the ceremonies, SCI FI Wire—which can be found at scifiwire.com and will keep its name—spoke to Howe about the ways in which the name change broadens the company's horizons as a media destination for imagination-based entertainment.

"I think it's a great opportunity for people who don't think they like sci-fi/fantasy to come check us out," Howe said. "It opens us up to a whole new audience. It says to people that we're now no longer just the literal sci-fi." 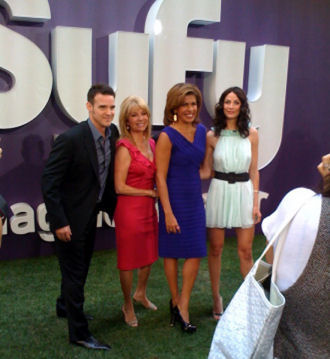 Howe described Warehouse 13 as "absolutely in the sweet spot" in terms of fitting the Syfy philosophy. The show, which premieres tonight with a two-hour pilot starting at 9 p.m. ET/PT, "has two very relatable lead characters [McClintock and Kelly], ... investigators assigned to this warehouse in the middle of nowhere that's full of these crates that contain objects with special powers," Howe said. "And it's their job to figure out what those powers are and to figure out how to prevent them from ruining the world's day, which is the promo line."

Howe added: "What's great about it is that it's set in the here and now, it's very human, and it has a great sense of humor. It's a really fun Da Vinci Code/Raiders of the Lost Ark action-adventure. So it's smart, and it's also fun, which is exactly the kind of show we're after [for Syfy]." 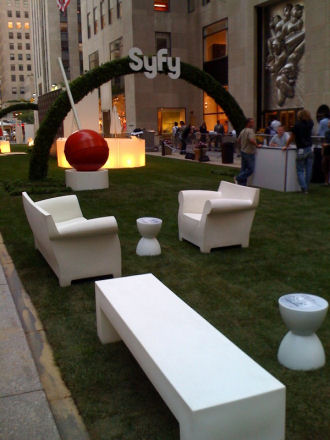