Science Behind the Fiction: How would scientists make Jurassic World's super-sized dino?

Is there anything better than realistic dinosaurs chasing down unsuspecting theme-park goers? The longevity of the Jurassic Park franchise is good evidence that there is indeed no better thrill than the predatory stalking of reanimated prehistoric creatures. This weekend's Jurassic World: Fallen Kingdom marks the fifth installment in the series that got its start 25 years after the debut.

Based on the Michael Crichton novel of the same name, Jurassic Park, directed by Steven Spielberg, introduced the world to InGen and their genetic monstrosities. Despite their appearance, we learn before the end of the first film that the dinosaurs populating the park aren't pure dinos; they exist as a result of plugging genetic gaps with modern animals like frogs.

Could the simian world of Planet of the Apes actually be our future?
Science Behind the Fiction: Can we believe the Area 51 witness or was he a liar? 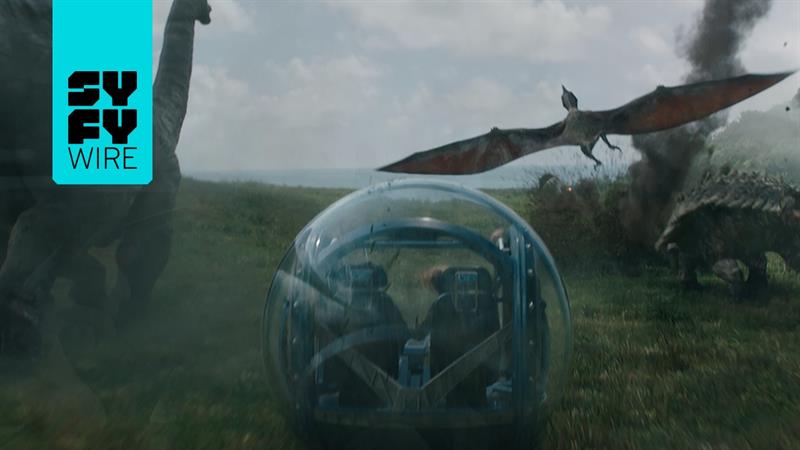 The park failed before it ever opened, but that didn't stop it from spawning three movies before its run was complete. Bringing the series back after a hiatus of 14 years required relaunching the park as Jurassic World.

We, as viewers, arrive at a park that's been running successfully for a number of years. Ticket sales are down and investors are demanding a new attraction to boost attendance. In response, the team at the Hammond Creation Lab, headed by chief scientist Dr. Henry Wu, created the hybrid dinosaur Indominus rex by combining the DNA of a T-rex with other species.

The exact makeup of the I. rex is classified, as we learn from Claire Dearing (Bryce Dallas Howard). We know that it includes DNA from modern cuttlefish and is essentially a giant, super-powered raptor. The rest, however, is unknown. So, how might we go about building a giant dinosaur?

We've already covered CRISPR, the relatively recent technology that allows for directed editing of genes. It's a given that this technology, or something like it, would be required for any attempts at custom hybrid dinosaurs. The trouble is in making changes to an existing genome without unexpected consequences.

A recent study out of Columbia University has cast a shadow over the technology, suggesting it may not be as precise as previously believed. While correcting for blindness in mice, the study revealed unexpected consequences for more than a thousand other genes. In fairness to CRISPR, there is some question as to the methods and sample size of the study in question. Still, we might not be quite ready for this technology to hit center stage.

Assuming Dr. Wu and his team have developed a tried and true process for creating hybrid dinos, they still have their work cut out for them in creating a giant raptor.

Perhaps the biggest hurdle they would have to overcome is pure size. When it comes to building an animal from scratch, size doesn't play well.

There seem to be some concrete rules when it comes to the evolution of animals over time. There's no question that the largest animals that have ever existed exist today. Blue whales, so far as we know from the fossil record, are the largest animals ever to have lived. And there is considerable evidence that size increases in populations over time.

A study out of Stanford has shown that animal populations with larger body sizes have a higher likelihood of propagating and diversifying over time. The research suggests that animals with larger body sizes are better at traveling large distances, burrowing deeper, and capturing larger prey. All of these are indicators for a species long-term survival. In short, the larger you are, the better you are at surviving and the more likely it will be that your offspring will be even larger. This isn't true for every species, but it seems to be a trend when averaged out over all cataloged life forms.

This is good news for the Hammond Creation Lab, as it suggests that life favors larger forms. It doesn't, however, mean that a specific species can be forced into becoming larger. The size of a specific organism or species is, according to our best knowledge, rigidly defined.

Body plan, including size, is defined genetically by hox genes, a subset of homeotic genes that determine the way a body is laid out. These genes determine the types of appendages and structure of an individual. Think of them as a blueprint for an animal.

These genes can account for dramatic size differences between similar animals like elephants and mice, which have similar body plans on incredibly different scales. Common knowledge might suggest that the difference in size is a result of cellular generation. Research into cell growth, however, doesn't bear this out.

Final size seems to have no relationship to cellular growth rate. When growth rate is manipulated in salamanders and mice, hox genes appear to compensate by either increasing or decreasing cell size. When cellular division is sped up, cells grow larger and vice versa. In simple terms, if an individual grows cells at a faster rate, the cells reach maturity at a smaller size; when they grow slower, they become larger. The result is that the final organ structure is the same size, regardless of cellular growth rate.

The data suggest that cells have some inherent knowledge regarding final structure and size and accommodate accordingly. The secret to growing a raptor of unusual size would require a manipulation of the hox genes that determine final structure.

A better understanding of how populations increase in size over time might provide the key to creating truly terrifying genetic monstrosities for future theme-park experiences.

Until then, we'll have to satisfy ourselves at the cinema when Jurassic World: Fallen Kingdom hits theaters on June 22.