SDCC: Clearing up the supernatural elements in Jonah Hex

In the comic books, Jonah Hex was primarily a real-world period action hero. The western gunslinger only faced supernatural foes in a few issues, but most reports on the movie version indicate a voodoo plot. Not so: The film's director, Jimmy Hayward, told reporters that even Variety got it wrong.

"I don't know where the voodoo practitioner raising the army of the undead came from, but that has nothing to do with the film," Hayward said in a news conference over the weekend at Comic-Con in San Diego. "John Malkovich's character is more of a terrorist who's upset about the Civil War than he is someone who's trying to fight and re-win the Civil War."

West Gone Wild: 9 of comics’ weirdest westerns
What Megan Fox has to say about her Jonah Hex role, and it's not what you think

Hex himself may be larger than life, but more in the mythic sense than the actual superpowered one. "I think Jonah Hex, he's been shot so many times, the legend is he's got one foot in the grave and one foot here on Earth, and so we approach it by everybody else's version of who Jonah Hex is," Hayward continued. "At the beginning of the film, we bring out the John Albano quote, 'He's a hero to some, a villain to most, but wherever he goes, they speak his name in whispers.' So at the beginning of the film, he's a scarred bounty hunter, just a horrible guy, this murderous guy. You tear the layers off, you see that there's this normal guy in there, but he's kind of in purgatory until he settles the score."

Jonah's relationship with the undead may even have a simple medical explanation. "He might be mentally ill, but he definitely talks to the dead sometimes," Hayward added.

Hayward stepped in for directors Mark Neveldine and Brian Taylor, who were originally attached. Their script remains the source material, said producer Andrew Lazar. Lazar credited their balance of supernatural and authentic comic-book elements with solving 15 years of development hell on Hex. 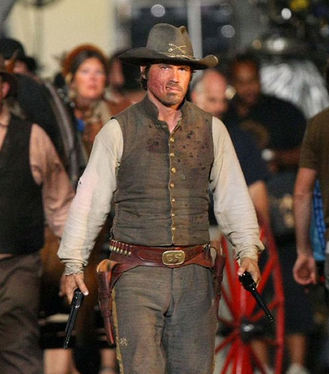 Josh Brolin, who plays Jonah in the film, reminded viewers that even Hex's appearance qualifies as supernatural. The portrayal of his facial scars is not exactly medically accurate. "The eye thing, I wasn't going to bring that up, but it's one of those things," Brolin said during the conference. "Jonah Hex is a comic book. It's drawn. In reality, if Jonah Hex had had an eye like that it would be a little raisin somewhere in the back of his brain, you know what I mean?"

Brolin and company did not want to go too grotesque on the eye, because close-ups of eyes are an integral part of the western genre in which Hex plays. "We thought about it," Brolin continued. "We didn't have the money to do CGI and all that kind of stuff, and we really didn't want to, because it's all about right here [in the eyes]. You go back to the Clint Eastwood spaghetti westerns, any spaghetti western, the Japanese, whatever. It's about right here. It's all about that expression."