SDCC: Heroes offer up lots of spoilers for season four

Based on the overwhelming screaming of the capacity crowd, you'd never know the series was suffering slipping ratings. The audience gave the panel a standing ovation as they entered the room and took their seats. (Spoilers ahead!)

Right from the top, Kring opened the panel by thanking the loyal participants assembled.

"I want to take a minute to say four years ago we came here with a pilot," he said. "We didn't have much to show; the series was just a twinkle. But we showed it to this crowd, and it was because of the fans here that the show became what it became. We have never forgotten that and want to thank you for standing in lines and being so loyal all this time."

Kring then talked about the themes of the fifth volume, "Redemption" (set to begin on Sept. 21), which starts up three months after the end of "Fugitives." All of the heroes are assimilating back into "normal" life with varying degrees of success.

"Now every single one of them can go back to their normal lives, but how do you go back to being ordinary?" Kring posed. "Do you hide, do you try to assimilate? To typify that idea, we are introducing a new wrinkle. The whole time you were watching, there was this other group that learned how to hide in plain sight. We created this carnival. They have been hiding for all this time and coming in and out of view. The carnival will now show itself."

Kring then introduced footage from the first three episodes. Claire Bennett (Panettiere) meets a new friend (Zima) on her first day of college. Intercut is Knepper's carny boss Samuel spinning an inspiring speech to his fellow "freaks" about redemption as they stand in a circle over a grave site.

Sylar (Quinto) is shown appearing to Matt Parkman (Greg Grunberg) and his mother, Angela Petrelli (Cristine Rose), in oddly disturbing visions. Resurrected icicle lady Tracy Strauss (Ali Larter) is back and talking to Noah Bennett (Coleman) about wanting to kill for revenge. A rather subdued HRG instead suggests that perhaps that this is the time for their redemption.

Back in New York, Peter (Ventimiglia) is back working as an EMT and saving lives in a different way. But a mysterious tattoo of a compass on his arm looks to be a catalyst for more danger. Swoosie Kurtz returns as Angela's double-dealing BFF, who is revealed to be working behind the scenes to murder Nathan Petrelli (Pasdar, who is really dead, in case you are keeping track). The footage also showed a lip-lock between Claire and her new roommate (Zima), which elicited a howl of approval from the audience. Lastly, the sizzle reel ended with Sylar saying to Parkman, "I want my body back," followed by a dramatic shot of a hand rising from the grave and Sylar pulling himself out of the dirt. 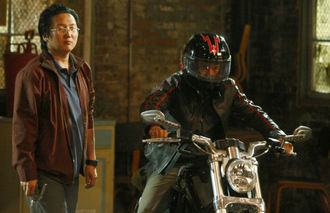 The actors were asked to describe the state of their characters' lives at the open of volume five, and they shared:

Jack Coleman: "I am in a place where we think we are setting up a new Company. My marriage and my life are falling down around me, so there is more empathy from him with what's been going on with the powered people. I want my family together, but I don't think that is in the cards at the start."

Masi Oka: "Hiro starts where we left off, with the nosebleeds and the diagnosis of a possible terminal illness. He's realized his true destiny and starts out the volume back at Yamigato to start a business with Ando [James Kyson Lee]. It's about Hiro's journey in what he thinks might be his last hours or days or months."

Hayden Panettiere: "My character is in her freshman year of college, and she gets a taste of the normal life she is chasing." 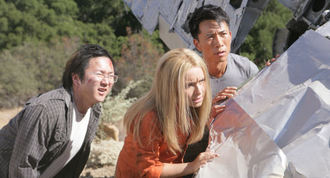 Adrian Pasdar: "At the end of last year Tim [Kring] gave me the upshot that Zach and I will be sharing a body. I said we have been doing that for years ... his name is Masi. [Laughs.] By midseason we start explaining the details of our separate journeys, and it gets interesting."

Zachary Quinto: "My character exists in two places now—one is with Adrian physically, and the other is inside Matt Parkman's head. I am messing with his mind and giving him a taste of his own medicine."

Milo Ventimiglia: "Peter is back to being a paramedic. As the seasons have gone he's been shot at, ... his dad tried to kill him, and he ultimately killed his father. Where do you go on from that? Go save some lives. He's seen it all. And he's got a sense of humor now and smiles more because nothing phases him."

With the return to the ordinary for the extraordinary, Kring said the show is coming back full circle. "We have been planning this arc for quite a while, where everybody would go back to their normal lives. As a show it allows us to strip away things that are harder to relate to. When Claire is a freshman and Parkman is a detective, and then Nathan is a politician, it makes it easier. ... We just want to dig a little deeper into our characters and what's motivating them, and that's always been a juggling act. We may see some characters sit out episodes so we can focus on the others, so we aren't bouncing around so much."

Lastly the series newbies spilled some details about the Sullivan Brothers carnival counterparts they play.

Ringleader Knepper said, "Samuel will have scenes with all the heroes that are bringing out the vulnerable side in all of them." Olivieri said that her character Lydia is close to Samuel, working as an empath to help in his search off tracking down other extraordinary people in the world: "I'm a bit of a mystery, so what happens with Lydia we don't know yet. What side of the fence she plays on, we'll have to see." The last of the new carnies was Darth Maul, aka Ray Park, whom the con crowd was thrilled to see on the panel. As Edgar the knife thrower, Park said his character is another speedster on a mission: "I'm also sent out into the world by Samuel. But I have to do some things I don't want to do, because he just wants peace and redemption."

Zima said she plays Claire's fellow college freshman Gretchen Berg. She teased, "I think I am Claire's first true friend since the first season, ... with privileges."

The panel closed with one last glimpse of the new season, with an intricately choreographed fight scene between Park's Edgar and Peter Petrelli. It left the crowd pumped and seemingly stoked for the show's return in two months.