With ABC's Lost wrapping up its final season in 2010, there's suddenly a blank hole looming in the television landscape when it comes to cryptic, serialized television shows. Is ABC's upcoming series FlashForward the answer?

How about yes and no?

Little-known sci-fi fact: Here's what Nolan originally planned for his Batman trilogy
Batman vs. Superman writer reveals who he thinks would win in a fight

Based on the novel by Robert J. Sawyer, the series revolves around a global event in which all of humanity blacks out for 2 minutes and 17 seconds, and in that time everyone sees where they will be six months in the future. While the central conceits are different, there are plenty of similarities between Lost and FlashForward, from the unspooling of character-based mysteries to the large ensemble casts (including shared actors Dominic Monaghan and Sonya "Penny" Walger), as well as a time-jumping element.

Goyer confronted the question straight on. "Nothing is ever going to be the new Lost," he said. "I love Lost and haven't missed a single episode. The reason why it ended up at ABC is that Brannon and I wrote it as a spec script. There was a bidding war for it. I am friends with [Lost co-creator] Damon [Lindelof], and we talked, and the bottom line is that Lost was a genre-breaking show and its own unique thing: daring and challenging. The fact that ABC was courageous enough to put it on air made me think if they were courageous enough to put that on the air, then I think they would be courageous enough for us." 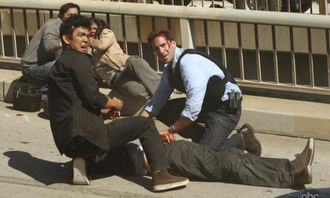 Goyer said that he and his partners pitched a full plan for FlashForward to assuage fears that they'd be making it up as they went. "We know exactly the shot that season one ends on," he said. "They obviously said this resembles Lost, in that it's a really cool script, but they asked, 'Do you have any idea where it goes?' We said, 'Yeah, we know how the whole season ends and how the whole series ends.' And they were like, 'Holy s--t!' So the basic plan to tell the story, we need as little as three [seasons] and could accordion it out. We had a big plan, and we weren't sure if they would freak out, and they didn't, so we went with ABC."

The series is already in production in Los Angeles, where Guggenheim is running the day-to-day operations as Goyer supervises and Braga consults (he is contracted as an executive producer on the eighth season of Fox's 24, a full-time job). Despite his busy film career, Goyer said he was so excited and committed to the series that he agreed to stay on the series for the entire first season, "no matter what."

Due to the protracted development process and pick-up of the series over the writers' strike period, Goyer said that the series is in a unique place: They are actually ahead of the game in terms of long-lead planning and script writing. "One of the things we were able to do was to get ABC to hire writers before we were picked up," he said. "We already have 10 scripts written, and we are [shooting] episode three. I think the audience smells a rat if you are just riffing. Fans want to know where you are going, and we do know. It's allowed us to lay in easter eggs and 'aha' moments well into the second season."

Goyer was quick to add that fans shouldn't infer that the meticulous planning means that there won't be any surprises left in the series as it leads to the season-ending reveal of the six-month premonitions, which take place on April 29, 2010, in both the series and real life. "Part of the fun is subverting expectations," he said. "Don't think we catch up to April 29th by treading water. There are game changers that happen, starting in episode seven." FlashForward premieres on Sept. 24 at 8 p.m. ET/PT.