If James Cameron's Avatar was the most highly anticipated panel of the day Thursday in Comic-Con's expansive Hall H, then Kick-Ass was certainly its most unexpected—and amazingly, both generated the same stunned reaction from fans and attendees.

Based on the comic-book series by Mark Millar and John Romita Jr., the film by director Matthew Vaughn (Stardust) takes comic-book mythology, transposes it onto reality and then turns the combination inside out, creating a violent, foul-mouthed, exciting and gloriously irresponsible movie. Vaughn, Millar, Romita Jr., screenwriter Jane Goldman and actors Clark Duke, Christopher Mintz-Plasse and Chloe Moretz spoke about their participation in the film and screened clips for a surprised but completely satisfied audience.

Although Vaughn is a seasoned filmmaker, with two previous directorial works and many more producing efforts under his belt, he seemed unable to set up the clips, stumbling over his words as he introduced the film. In the first sequence, a man stands atop a skyscraper in a costume as the main theme from Superman plays and a voice-over by Dave Lizewski (Aaron Johnson) wonders why so few real people have ever decided to try and become, or at least emulate, the superheroes they read and fantasize about. When the costume-clad man dives off the building, passersby applaud—that is, until he crash-lands violently on top of a taxicab.

In the next scene, Dave continues his query with two buddies. Marty (Duke) succinctly (and offensively) rebukes his opinion that people should try to become real-life superheroes. Undaunted, Dave eventually makes a costume. In the meantime, Damon Macready (Nicolas Cage) tells his daughter, Mindy (Moretz), to prepare herself as he loads and aims a gun at her. They share father-daughter banter before he drops her to the pavement with a slug from the .45. Miraculously, she is unharmed. Meanwhile, after running into two toughs who mugged him earlier in the film, Dave tries to intercede as they are stealing a car, and attacks them; but even as he begins to truly kick ass, one of them gains the upper hand and stabs him severely in the abdomen. As the muggers run away, he stumbles to his feet and out into the street, where a car smashes into him and topples him to the ground again. 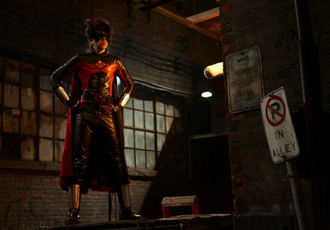 The final scene was the most difficult for Vaughn to describe, but in retrospect his lack of articulation seemed more like deliberate misdirection, because in that one scene the film goes gloriously over the top, with violence and profanity that won't soon be forgotten, even by the notoriously shock-proof Comic-Con crowd. In the scene, Dave goes to visit Rasul (Kofi Natei), a thug and drug dealer, in order to tell him to leave the wannabe hero's would-be girlfriend alone. Entering the dilapidated apartment where Rasul is playing video games while henchmen lurk on nearby couches, he confronts the imposing figure, eventually shooting a taser at his face. While he momentarily gains the upper hand, Rasul's henchmen quickly tackle Dave and subdue him, but before he is thoroughly dissected by the criminal crew, Hit Girl (Moretz) stabs a sword through Rasul's chest and proceeds to decimate everyone else in the room.

Even for a R-rated film, the violence pushes the limits of good taste, not least because Hit Girl manages to effortlessly combine dexterous martial-arts moves with a seemingly nonstop stream of profanity. As soon as the clip ended, the audience applauded enthusiastically, offering a standing ovation at footage that simply blew away any expectations they may have had.

Vaughn eventually screened a short clip—twice—of various other shots and sequences from the film, including shots of Christopher Mintz-Plasse as a predictably clumsy hero named Red Mist, and a breathtaking shot of Hit Girl as she reloads her guns in mid-air. But if there was a sucker punch that punctuated James Cameron's confirmed total knockout, Kick-Ass was surely it.