Ponyo was originally conceived and produced through Miyazaki's native company, Studio Ghibli, but even removed of its cultural specificity, the film stood out sharply from its Western counterparts; indeed, after presentations for the re-release of Toy Story 1 and 2 and even new projects like The Princess and the Frog, its dreamlike quality and lyrical storytelling truly seemed to be part of an entirely different set of artistic rules. Lasseter, who is Miyazaki's friend as well as his colleague, was effusive with his praise for both the filmmaker and his film, which he said "America deserves" as he brought the director to the stage.

As he took the stage, Lasseter asked him about his storyboarding process. Via a translator, Miyazaki explained, "My process is thinking, thinking and thinking—thinking about my stories for a long time. If you have a better way, please let me know."

Talking about how he came up with the idea for Ponyo, Miyazaki revealed, "the first idea I had for Ponyo was that the little boy picks up a frog. But I couldn't work out a good character for a frog, so I turned it into a goldfish." The film follows the evolution—both emotionally and literally—of that relationship, but Miyazaki indicated that he wasn't interested in crafting something that was too conceptually complex, even if it was always going to be visually stunning. "I wanted to make it a simple story, and to show simplicity through the colors. Since the main character is red, I didn't want her color to overwhelm the other colors. So the other colors had to be brightened as well."

After discussing his ongoing collaboration with composer Joe Hisaishi, Lasseter set up a clip from the film that involved Ponyo (Noah Lindsay Cyrus), the little goldfish that wants to become a real girl; Sosuke (Frankie Jonas); and Sosuke's mother Lisa (Tina Fey). As the scene opens, Ponyo and her brothers and sisters race upwards from the bottom of the ocean; as they near the surface, they seem to evolve and expand and transform—although Ponyo becomes a girl while the others become massive fish. Tossing ships to and fro, the fish tumble and spill over each other like an unstoppable tidal wave, but Ponyo runs and jumps easily at its crest, sprinting on the surface of the water. 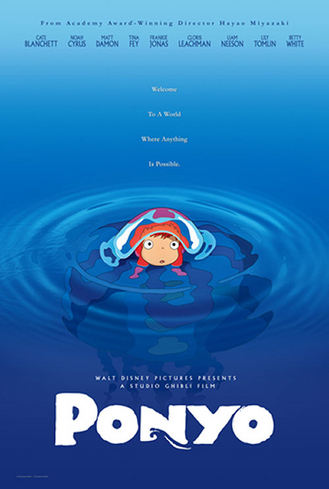 Meanwhile, Sosuke and Lisa drive along the coast as the ocean roils next to them; only Sosuke seems to notice that the water looks like a swirling mass of fish, and that there's an odd little girl running on their heads. Ponyo catches up to their car, and Lisa comments, "This wave is just after us," but turns a corner and the wave subsides as Ponyo is thrown into the sea. Sosuke asks him mom to stop the car so he can check on the little girl, but when he gets out, a gust of wind picks him up and carries him off to join her in the water. But Lisa grabs him and pulls him back to safety, and they drive off as the ocean begins to calm.

As the lights came up, San Diego Comic-Con's Eddie Ibrahim appeared on stage and presented both Lasseter and Miyazaki with the convention's Inkpot Award. "I am very honored to receive this," Miyazaki said. "Thank you very much."

As Lasseter opened the floor for questions to the entire Disney panel, which included filmmakers from the Toy Story films, Beauty and the Beast, and The Princess and the Frog, he interrupted proceedings to remind the audience that Aug. 14 is when Ponyo will be released in the United States in 800 theaters: "It's a really nice, big release across the country." Whether the film itself translates to American audiences remains to be seen, but the day's panel offered a rare, unique and important lesson in understanding Miyazaki.