When Peter Jackson invites you to sit down with a few dozen of his closest friends in the press, you go, and SCI FI Wire was lucky enough to spend a couple of hours with the Oscar-winning producer/director of the Lord of the Rings films, the upcoming gritty sci-fi drama District 9, the adaptation of The Lovely Bones and the two new Hobbit movies being directed by Guillermo del Toro.

In a cozy salon in a San Diego hotel, Jackson was able to relax in a wing chair with a cup of tea and chat amiably about films and his hobby—rebuilding antique World War I-era airplanes—far removed from the chaos of Comic-Con outside.

During his chat, he screened an extended collection of clips from his upcoming Lovely Bones, based on Alice Sebold's novel, told from the point of view of a 14-year-old girl who is brutally murdered but remains behind in spirit to watch how the crime affects her surviving family. (He revealed that a trailer for the film will be released in theaters on Aug. 7, along with Julie and Julia.)

The clips provide a glimpse of Jackson's warm style for the film, which is set in the 1970s: We are introduced briefly to the innocent Susie Salmon (Saoirse Ronan) and her parents, played by Mark Wahlberg and Rachel Weisz, before she is tricked by a neighbor, George Harvey (an unrecognizable Stanley Tucci), into an underground room, where she meets her fate.

We then see scenes of the police investigation, her family's anguish and Tucci's feigned innocence. The clips also provide a brief look at Jackson's luminous version of Susie's personal "heaven" or afterlife: A glowing gazebo floating on water, life-size ships in bottles on a lake, leaves falling in a sepia-toned forest glade.

Jackson described his approach to the wrenching story. Following is an edited version of our conversation about The Lovely Bones. Tomorrow we'll have Jackson's thoughts about The Hobbit, and on Wednesday Jackson's District 9. The Lovely Bones opens on Dec. 11.

This is a film that's obviously very different from your blockbusters. Do you get the feeling of, when you made this film, was it more like the Heavenly Creatures experience?

Jackson: Yeah, it was definitely more like the Heavenly Creatures experience, which was the reason why I made it, in a sense. You know, I had done, obviously, four of those big blockbuster effects films in a row, and I just ... felt like trying something that was going to be hard and difficult and very different. And I'm just like anyone: ... You just want to keep trying things that you aren't sure that you can do. And so this seemed like ... a very interesting challenge. I loved the book. I cried when I read the book. And most of it is a very personal book, because ... I think how you take that book when you read it [is] very much based on your own life experience. If you've had loved ones that you've lost, and if you think about that stuff, and if you've been affected by it, you're obviously going to take a very different impression of the book than if you haven't had that experience.

So the film is also equally personal, because ... it's our interpretation, it's really myself and Philippa [Boyens] and Fran [Walsh] collaborating and adapting the book. It was interesting, because it's a very, very difficult book to adapt, I have to say that. It doesn't lend itself to any sort of film structure. ... We haven't slavishly followed the book. There's big sections of the book that we never used. We elaborated on other bits of the book. ... We very much adapted it. It's certainly a personal adaptation rather than, like, a very accurate copy of the book.

How much of your own impression of the afterlife went into this adaptation?

Jackson: Well it's not really my impression of the afterlife; it's Susie's. Because the lead character, Susie Salmon, she's a 14-year-old girl in 1973, ... when she dies. So we have a very '70s-feeling afterlife, which is sort of done on purpose. .... For our research in the afterlife, we actually looked at episodes of The Partridge Family. Which is not where you normally go for the afterlife. Although maybe some people do, I don't know. ...

People refer to it as heaven, but you never actually go to heaven or see heaven in the story. ... It's like an in-between [place]. ... The idea, which is in the book, is each person experiences it based on what their life experience is. ... What Susie experiences in her afterlife is based on being a 14-year-old in 1973 and ... the pop culture that she's grown up with and the life experiences she's had. ...

She's also wonderfully funny, too. ... We didn't want to make a maudlin, depressing, tear-jerky sort of ... film. We wanted to make it very lively. The great thing with Susie is she doesn't feel any self-pity. She's got this wonderfully ironic, wry observations, and she watches her family deal with her death, and she watches her killer, and she watches ... the police bungle the investigation, which drives her crazy, in a very humorous way. And she comes up with a very ... bad idea of trying to use her father as a weapon against the killer. Which, ... she comes to realize, ... was a mistake. But she realizes a bit too late, so it's got an interesting story to it. 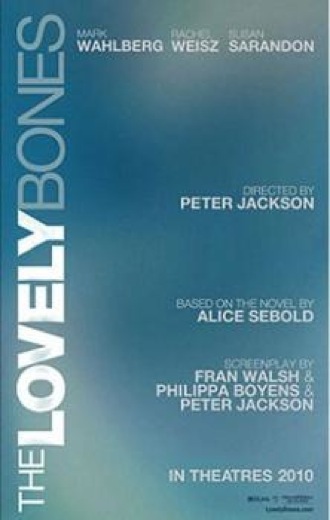 Watching that footage, it seems obvious that there are tonal shifts in the picture. The stuff with the family seems to be a little bit darker, a little bit heavier, and the stuff in the afterlife seems to be brighter. Can you talk about balancing that and sort of making that work, and how tough that is?

Jackson: Balancing the tones, yeah. I mean, the lighter stuff, there is a moment in the film where Susie has fun in the afterlife because ... you have this degree of freedom and this incredible, slightly hallucinogenic experience. But ... that's fleeting in the sense that she also witnesses and is able to look at what's happening. She can hear and see what happens, but she can't be heard. It's not that easy for her ... actually to be seen or to be heard by her family. ... It's not like a ghost story in the traditional way that you'd imagine. So she's very frustrated. So even though there's ... this crazy fun that she has for a while, ... I would say the tone of the movie is pretty much like a thriller, really.

Can you talk about the casting of Mark Wahlberg? Because I know a lot of fans of the book, when he was announced, they kind of had a little bit of a problem seeing him as the dad. I'm wondering, what did you see as Mark Wahlberg as the dad that you wanted to put him in the film? ...

Jackson: We really liked his comedy that was in I Heart Huckabees, and one of the things with the character of Jack Salmon is he's an obsessive. I mean, he's kind of an obsessive in a gentle, comedic way, and he's an obsessive in his relationship with his daughter. And then, when she dies and he's wracked with guilt, but he's also thinking, "Who did this? Who did this?" And he becomes obsessed with finding the killer. So we wanted somebody, but we didn't again want to play that heavy and ... make it sort of maudlin. We wanted somebody who was going to be a little bit nutty, and we really liked his nutty obsessiveness in the I Heart Huckabees film. So that was actually the thing that sort of steered us on to Mark.

Jackson: Yeah, well, Stanley liked the idea of playing the part, but I think he was terribly worried about being spat on in malls and [that affecting his life], because he's a very, very evil character. He plays a very, very nasty guy. ... So one of the things was finding an appearance for Mr. Harvey, which is the name of the killer. ... He is the basic next-door-neighbor type of guy, so we wanted on some level to make him look like that traditional person from the '70s, again. But Stanley also liked the idea of looking as least like Stanley Tucci as he possibly could and for ... the sake of his life following the movie.