I can't get enough of Syfy's new series Sanctuary, and I know I'm not alone. The show started out on the Web, grabbed a ton of fans and proved so popular that it ended up as a full-fledged Syfy series. We caught up with star and executive producer Amanda Tapping at Comic-Con in San Diego on Saturday, where she gave us a glimpse into the show's popularity, how she feels about sci-fi fans and whether she believes in the supernatural. (And she said she will appear briefly in Stargate Universe.)

I asked her about her decision to leave the Stargate franchise, with which she had been associated for more than 10 years, and whether she was happy with the choice. "I am, yeah," she said. "You know? It had to be done. I mean, on a lot of different levels it had to be done. For me, personally, as an actor and as a creative person, I had to take a leap of faith. ... The scary thing is, when you're so comfortable and you're working on a show that you really love so much with people you care about, and they've been part of your family for such a long time, to actually go off to university and say, 'See you, Mom and Dad, thanks! ... Public school and high school have been fun, but I have to go get a degree,' it's really scary. And they were hugely supportive. But I remember the defining moment of, I can't do it. I can't do season five [of Stargate Atlantis]. Sanctuary may get picked up as a TV series, and if I'm not available, it won't. I look back and think, absolutely. I'm so fulfilled. And I'm still a part of that family. I got a day on [the upcoming Stargate] Universe, and hopefully they'll be another SG-1 movie, and there's always a place for Sam Carter, which is wonderful."

I wanted to know more about the Stargate Universe appearance. "I shot for a day with them," she told us. "A little cameo. It was great. I put on the army boots again, and I went, 'Oh, yeah!' and then went onto set with a lot of the same crew. It was great."

Tapping revealed some of her dream guest stars for Sanctuary. "There are a million actors, yeah," she said. "Realistically speaking, there are quite a few British actors that I'd love to see on the show. Honestly, I'd love to get Teryl Rothery [who played Dr. Janet Fraiser on SG-1], ... people I know and love and care about, ... or Jennifer Saunders or Carol Burnett. You know? There's people I would die to work for. I just met Catherine Keener on an airplane, and I'm such a huge fan of hers. I had a total geek-out fangirl moment. And then we ended up spending the whole flight talking. I'd love to get her on the show. She's just a cool, cool, cool chick. And a great actress."

I wanted to know if she actually asked. "No, no. I said, if you come up to Vancouver, call, and we were all on the same flight and we just had a blast. So we said, call us. Come for dinner. You know?" she laughed. "The door's always open. She's awesome. ... This is going to sound hokey, but I'm sitting at a table of women, so I think the esoteric will be understood. We cast not only really good actors, and we're lucky that there's such a talent pool out there, but we cast people that we want to hang out with. We're so protective of our home, and the Sanctuary has become our home; I mean, four years, [executive producers] Martin [Wood], Damian [Kindler] and I have been trying to get this show off the ground and get it happening, and now ... we're so protective of it. And so people will come in to audition, and they'll do a good audition, but you go, no, I don't think they'll fit on our set. You know, there's crew members who've been on the show who have left because it's not, ... our vibe is really gentle. It's 'we.' It's not 'us.' ... There's mutual respect and admiration, so we cast actors who we think will really fit into that vibe, and we've been so lucky. It's been amazing. And I think that that is why you can cast a really great actor, but because they feel so comfortable and at home, you get even more." 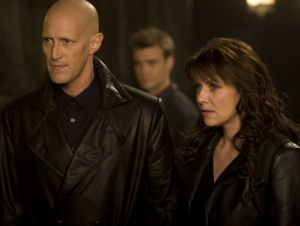 Sci-fi fans, when they like something, are extremely loyal. And this show has had a following since it premiered as a Web series. I asked Tapping about the phenomenon. "I think it's very accessible. And I think that we've always tried to be very accessible. I think we've shown the fans genuinely how appreciative we are of them. But I think it's ... being a sci-fi fan used to be this weird little moniker. It's like your dirty little secret ... it was this weird little 'Oh, you live in your parent's basement and you spend all your time on the computer. You don't get out.' It was this weird societal perception of sci-fi fans, and our show deals with people who are perceived as abnormal. ... I think that it speaks to how some sci-fi fans feel. I mean, having talked to people who are like, 'Yeah, I don't tell people at work that I go to conventions.' Well, why not?" she said. "They're fun! And you get to meet people who are of like mind. Come on! Embrace it! And people are. And I think that our show really speaks to that."

Tapping also mentioned a few characters that she'd like to bring back from the Web series. "We actually just brought Wexford [Atlantis' Paul McGillion] back. ... He's on our season finale. We've been trying to get Wexford back on the show since the webisodes, and now we've found the perfect place for him. ... We've been trying to get David Hewlett [Dr. Rodney McKay from Stargate SG-1 and Atlantis]; ... we have. There was a scheduling issue. He was shooting a film. And then there was another scheduling issue. ... We'll get him on the show eventually. We love him. We want him to be a part of it."

Nikola Tesla (Jonathon Young) is portrayed as a vampire on the show. "I sort of have always liked vampires," Tapping said. "I've always liked that dark mythology. ... Vampires are hot right now. ... I think we have one of the best vampires going in Tesla. I like the fact that we take historical characters, ... Nikola Tesla, a vampire, what? That's crazy! I like that we do that. ... Jonathan actually played Tesla onstage. He did a one-man show about Tesla before we cast him as Tesla on our show. And Nikola Tesla is being played much different ... in our series. Tesla didn't like to be touched. He ended up living in a room, and he was surrounded by pigeons ... so it was quite filthy for a germophobe to live in this environment. ... He was just a really bizarre character. He never had a relationship. ... We played Tesla somewhat different for obvious reasons."

I was lucky enough to get a chance to hang out with Tapping this past fall at a Ghost Hunters event. So I had to know if she really believed in the supernatural. "Oh, absolutely," she said. "I absolutely believe in it. There are forces at work in our world we don't understand. And maybe we shouldn't. Maybe that's part of the beauty of mystery. I love the fact that there are mysterious things and the unexplained, and people try so hard scientifically to explain it. But maybe it just shouldn't be. I love that. I often feel like there are spirits around that are protecting me. I know when my eldest brother passed away, I kept knowing that he was around. I knew he was there. And he would manifest in different ways. This will make me sound totally hokey, but I absolutely believe."

Amanda Tapping lands recurring role on Supernatural (but as what?)
What 11 Stargaters have been up to since the series ended

The second season of Sanctuary will premiere on Friday, Oct. 9, at 10 p.m. ET/PT.