Seasons 1-2 of Walking Dead getting a retro horror makeover

As if The Walking Dead weren't creepy enough, it looks like the folks at AMC are about to give it a classic zombie-movie makeover. Fans, get ready for The Walking Dead—a la the 1968 classic Night of the Living Dead.

The network has announced that the entire first and second seasons of the hit zombie survival series will be reworked in monochrome black and white, partly as a throwback to the simpler days of cinema before all that pesky color became commonplace. The pilot got the same treatment earlier this year, and the studio apparently liked the results.

As fans of the comic book well know, Robert Kirkman's original version was also done in black and white—which only contributed to the creepy awesomeness of it all.

In an announcement included in the official Walking Dead magazine, AMC says the new versions should "give the series a Universal Monsters feel as well as mimicking the artistic style of the comic." 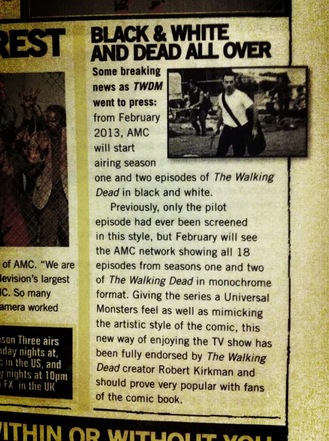 The new cuts are scheduled to start airing in February, likely around when the back half of season three kicks off. What better way to catch up on all the early action?