After last night's film-noir musical episode of Fox's Fringe, what do you do to top yourself? A Saturday-morning cartoon episode, maybe?

"You may be closer to the truth than you realize," producer Jeff Pinkner replied to a question posed to him and producer J.H. Wyman in a conference call with reporters this week.

"Remember that question," Pinkner added, seriously. "Deep in next season, remember what you just asked us."

Alrighty, then. Of course, we're not quite at season three yet, though Fox has already announced that the quirky, creepy sci-fi series will return for a third season. The job right now is to set the stage for next year, which brings us to "Over There," the two-part, two-night finale set to air on May 13 and May 20. (Spoilers ahead!)

"At the end of the season, I think that you'll be [thinking], 'Wow, now, this is a whole other world, and this is really interesting,'" Pinkner said. "Not a whole other world literally, but a whole other chapter that has been sort of talked around, but now concretely you will understand a lot more. So if we're heading towards anything, it's that. It really sets up a satisfying conclusion to what people have invested in this year, but also sort of opens up a whole other level of understanding that hopefully will propel us into season three and further. [There are] a lot of very exciting things that we've come up with that we're really excited to tell." 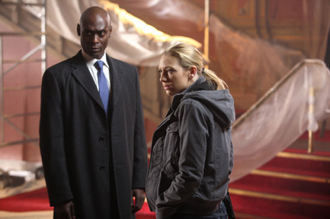 As fans know, Peter (Joshua Jackson) just discovered that he's different from other guys and, in fact, comes from the other side. So now both Olivia (Anna Torv) and Peter are wary of Peter's mad-scientist dad, Walter (John Noble). That fractured father-son relationship, now more fractured than ever, will continue to come into play in the coming weeks and next season.

"Relationships are complex and just for the very same reasons that I think that throughout the seasons, we never really want it to be easy, ... that just because it's a TV show in the United States of America, that the handsome male lead and the beautiful female lead should be together. ... You have to earn those types of things, we believe," Pinkner said. "So, when we're playing the emotion of a betrayal like that on a level that it is, I think, that it's all up to the human heart, which is complex."

Pinkner continued, "So Peter's going to have a very realistic reaction to the things that he's now aware of, and I think that that's the first step in a journey back to some sort of common understanding of a relationship. I don't think it's ever going to be easy, and it should supply us with a lot of material, because it's such an interesting dynamic. You just don't want to just say, 'It's all forgiven,' but you also want to have other flavors of the relationship, [and] not just 'You betrayed me.' So I think that's where we are."

Check back tomorrow for our Q&A with guest star Leonard Nimoy, the infamous William Bell!