Secrets revealed and EVERYTHING changes on tonight's Heroes

On the last episode on NBC's Heroes, Peter and Nathan/Sylar discovered that the real Nathan Petrelli was dead, something we've known since last season. Well, the gravy is going to really hit the fan on tonight's pivotal episode, "Thanksgiving," when it's all about turkey, pumpkin pie and family drama. Many of our Heroes will discover the truth about the secrets that have been marinating all fall. (Big spoilers ahead!)

"Growing up, Thanksgiving was a time that all the family got together, and all the peccadilloes that have been simmering all year all come out, 'cause everybody drinks a little bit too much and eats a little too much, and then it all comes out," said executive producer Adam Amus. "That's the idea of what this was. All these secrets that people have been keeping to themselves, they all reach a boiling point at Thanksgiving." Amus co-wrote the episode with his writing partner, Kay Foster, so we're thinking Thanksgivings at his house must have been fun.

"We're going to have three Thanksgiving meals: one at Peter Petrelli's apartment with Peter [Milo Ventimiglia] and Angela [Cristine Rose] and Nathan [Adrian Pasdar], One at the carnival, and one at the Bennet family." At the Petrellis, "Peter and Nathan are going find out what their mother did last season," said Amus.

Well, we can just imagine Angela spilling the beans on that ... "Yes, Peter, after Nathan was murdered by Sylar, I had Matt put his memories in the most vile, evil serial killer you can imagine and forced Sylar, your brother's murderer, to shape-shift into your brother. ... Please past the stuffing, Nathan dear?" 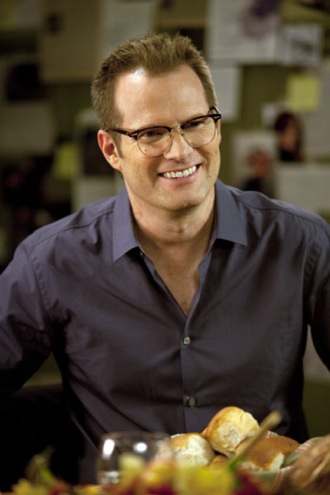 But the Petrellis aren't the only ones having issues. Carny Samuel (Robert Knepper) has some secrets of his own, which we're guessing will also bubble to the top for his own carnival family. "All that stuff that all comes out at the carnival. In the Bennet family it all comes out. ... All the secrets that everybody's been holding are all going to come out at Thanksgiving."

Don't you just love the holidays? Well, after tonight, there's just one more episode before the explosive Heroes midseason finale, "The Fifth Stage." It's already been teased that one of the characters you know and love will die, and that the actor will be leaving the series for good. We're guessing the midseason finale, which is episode 12, is going to be the episode where all the fireworks happen. And then Heroes will return in January for its last run of original episodes of the season.

"Our plans are to end this year, whether it's the last year or not, in a world-changing way," Amus said. "Whether or not we continue the next year, it will lend to future inspiration for whoever thinks about these characters, whether they exist on other platforms or whether they exist on television or whether it doesn't exist at all any more. It will lend your imagination to 'Oh, my goodness, the world has changed now, and what does that mean?'

Amus added: "We don't have to be saved from an island. We don't understand what the future fast-forward means. We don't have a central question to answer. What we have are people who have to live their lives and accept their lives and have to move on with their lives. And whether we keep telling their stories or not, as far as I'm concerned, these people will continue to live on in people's imaginations, because they are people who live with abilities, and that's both a blessing and a curse in our world. Those are stories that can continue to be told."