Let's be honest—the Star Wars franchise is a bit of a sausage fest. There's Leia, Padme ... and that's about it. Everywhere else you look, it's dudes as far as the eye can see. It turns out, though, that there were more women—they just got cut out of the movie.

It turns out that in Return of the Jedi there were not one, not two, but THREE women-folk piloting ships. That's right—a female trio fighting valiantly against the Empire that all wound up on the cutting room floor. Let's take a look:

The first A-Wing pilot (above) actually had a line, "Got it," but her voice was dubbed over by a man.

More interesting is this older A-wing pilot. Now there's a backstory that could have been interesting. Does she have children? Are they part of the Alliance? What if one of her kids was part of the Empire? A missed opportunity to be sure. 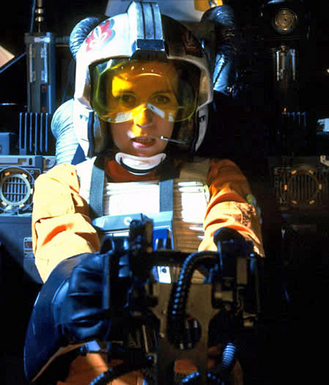 Perhaps most interesting of all is the case of actress Vivienne Chandler, who apparently had a whole page worth of dialogue as an X-Wing pilot. While the first two eventually merited a mention on the Star Wars Blu-rays, Chandler's scenes are as yet still unrepresented.

So we're left to ask the most obvious question—Why? Why were these women cut? Why are there so few women in Star Wars? Maybe it's a moot point, but we'd love to hear those stories. And more important still, we want to see some serious female representation in the new movies.