Here's an amazing triptych for the winter relaunch of a new Avengers series with our heroes banding together side by side. Cap, Thor and Iron Man united paint one pretty picture.

"Marvel is pleased to present your first look at the jaw dropping covers to Avengers #1, Avengers #2 & Avengers #3 by superstar artist Dustin Weaver! This December, the most popular heroes in comics together on one unbeatable team, twice a month - only in Avengers! From the blockbuster creative team of Jonathan Hickman and Jerome Opena, the Avengers "go large," expanding their roster and their sphere of influence to a global and even interplanetary level. When Captain America puts out his call - who will answer?
Big threats, big ideas, big idealism - these are the Avengers NOW!" 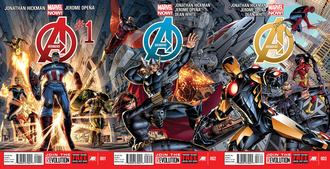 Wow, some bold statements to bolster those stellar covers. Believe the hype?