A new poster for the final four episodes of Fringe has been revealed, and it looks like a certain Big Bad is a little worse for wear. So what happened to Captain Windmark?

It looks like someone finally made him bleed, even though Observer-enhanced Peter (Joshua Jackson) got his ass royally kicked by the baddest baldie of all. As for what actually did the damage? No clue. But our best guess is that it has something to do with the resiliency of the human spirit.

New episode "Anomaly XB-6783746″ airs this Friday, and then the series will go on a hiatus until January to wrap up. The series resumes Jan. 11 and closes out with a two-part finale on Jan. 18 (starting at 8/7c).

Check out the new poster below (click for larger) and let us know how you think it's all going to end. 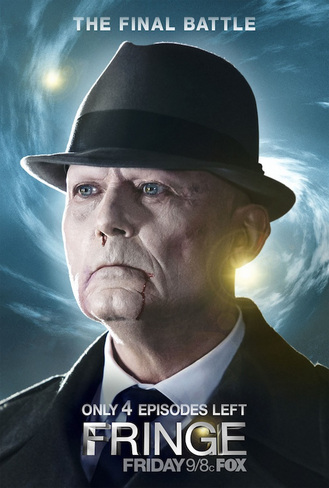