Superhero cosplay has grown into a huge subgenre, and there are now photographers out there who specialize in shooting awesome shots set in the Marvel and DC universes. Sometimes they push the limits—and in this case, one pic was banned from Facebook for being a bit too controversial. Wanna see it?

The pic in question, taken by photographer Adam Jay of Superhero Photography, shows off Venom attacking a young woman, covering her body in the inky black suit.

It's an awesome piece of art, and it doesn't seem to show any more skin than half the bikini shots already drifting around on social networks. Here's how Jay described the turn of events:

"Ok so this morning I woke up to find that one of my images from the VENOM set has been pulled from Facebook. Which is a shame because it's the one that has been Liked over 15,000 times and shared nearly5000 times all within 24hrs! (why that one grrrrrr!!!!!)

So in case you missed it and you want to know what all the fuss is about, then please let me introduce THAT picture ... So in seeing this, can anyone tell me what is so offensive ..... (apart from it ROCKS!!)"

Check out the shot below and judge for yourself: 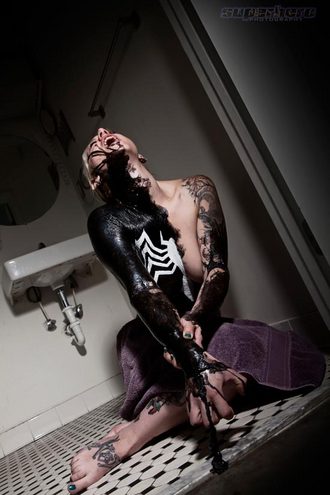 What do you think? Did it deserve to be yanked from Facebook?