So what do the Star Wars characters think of all those new movies?

Everybody asks what the former Star Wars actors think of Lucas going to Disney. People want to know if those actors will come back, if they're happy, if they're sad, if they already knew it was coming, and on and on. But nobody asks the actual characters! Until now, that is.

Bless Emily Whitten and Marc Vuletich, who used the power of comics to fill us in on what Luke, Leia, Han, Chewie, Boba and more think of a new trilogy. Sure, they've heard it all before. More Star Wars movies are a rumor as old as time, but this time it's different because, you know, it's actually happening.

But we're getting in the way of good art, so we'll let Whitten and Vuletich do the talking form here on out. 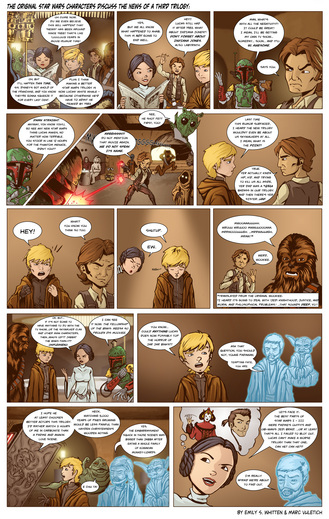