On the syndicated fantasy series Legend of the Seeker, the Seeker has dispatched the evil Darken Rahl, and our heroes (Richard, Kahlan and Zed) should just be able to lounge around and goof off knowing that all is right with the world ... right?

Not so much. Unfortunately, the good guys are about to experience the Wizard's Second Rule when Legend of the Seeker's second season begins this Saturday in syndication, right after a special episode designed to catch you up on the events of last season.

"Season two is basically going to pick up where season one left off, but what Richard is going to be confronted with is Wizard's Second Rule, which is something from Terry Goodkind's novel series," said executive producer Kenneth Biller. "And Wizard's Second Rule says, 'The greatest harm can result from the best intentions.' So, essentially, Richard [Craig Horner] is going to have to deal with the repercussions of his big victory, of fulfilling the prophecy, and killing Darken Raul."

Here are nine legendary spoilers for the Seeker's second season, along with hot new guest stars (spoilers ahead!):

Someone new joins the team, and Kahlan's going to have issues. 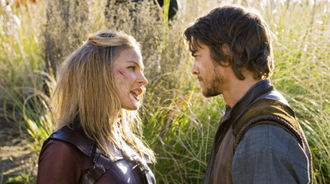 "There is disorder and disarray among the D'Haran's and the Mord'Sith in the absence of a strong man to unite them," Biller said. "There is a lot of jockeying for power and position, and Cara [the Mord'Sith who helped Richard kill Rahl in the season-one finale] ends up making a very tense alliance with Richard and Kahlan, ... which Kahlan [Bridget Regan] is not happy about." 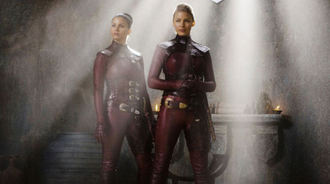 She's in the season premiere, and she looks hot.

Remember those skin-tight Mord'Sith outfits? Well, Carpenter's more than looking the part. "She plays a Mord'Sith, who clashes with Cara and ultimately with Richard," said Biller. BTW, you'll want to check out the knock-down drag-out fight between Carpenter and a naked Cara.

There will be plenty of other hot lady guest stars this season. 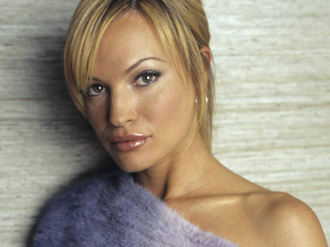 Star Trek Enterprise's Jolene Blalock ("T'Pol") will be recurring as Sister Nicci, a Sister of the Dark, and Jessica Marais's Denna will return to spin Richard's head around again.

"Denna has found a new tantalizing and very profitable way of making a living now that Rahl's empire has crumbled, but what we also will realize is that this is just a front for a grander plan she has to take over Dahara," said Biller.

"The show is way hotter and sexier this year."

"There's an incredibly hot and sexy introduction of Cara," said Biller. "It has a higher degree of epic action than we've shown before on the show. ... It's going to put Richard right square in the middle, in between former adversaries and former allies. Richard is going to have to make a very, very difficult decision about who he is and what his quest is going to be. It sets up the whole quest for the second season that Richard is going to be on with Kahlan and Cara. It sets up some real tension between Kahlan and Cara, who don't like each other very much and don't trust each other, but by the end of that episode, for reasons the audience will discover if they watch the episode, both will be by his side."

Without someone in charge, there's chaos. 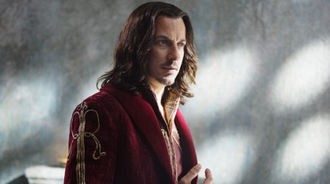 Last season's battle between Richard and Rahl screwed up the world more than just a little bit. 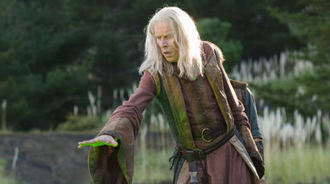 Richard, Kahlan, and Zed (Bruce Spence) will discover that "the powerful magic that collided when Richard killed Darken Rahl tore a rift in the veil between the world of the living and the underworld, and from the underworld, which is ruled by the Keeper, new and dangerous threats to Richard and to all life itself is going to emerge," he said.

There's going to be war. 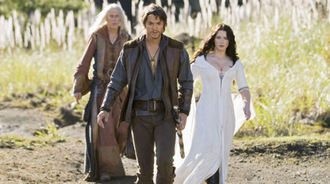 "The keeper of the underworld is now waging war on the land of the living, and Richard is going to have to fight that war. He's going to have to fight the creatures and minions of the underworld that are trying to essentially destroy all life, and while he's doing that he's on a quest to find the Stone of Tears. Legend has it the Stone of Tears is an ancient object that will heal the rift and once again protect the world of living," said Biller. "Richard's going to come up against our coolest and scariest creature that we've ever done. An unkillable creature." How do you kill and unkillable creature? "You'll have to watch," he said with a laugh.

Richard and Zedd will discover more about their own past. 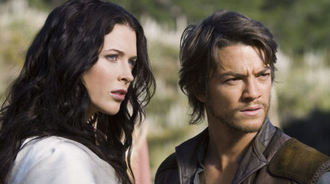 Richard will learn more about the mysterious circumstances of his birth. "He's going to find out that he's not exactly who he thinks he is," said Biller. Meanwhile, Zedd is going to "learn secrets from his past that he didn't know about. We're going to find out more about Zedd's history, some of which is dark."

The new season will riff on the book. 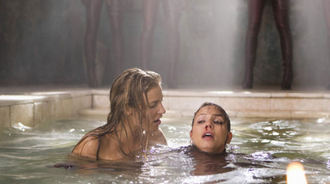 "As we did in season one, we're using some of the tentpoles and some of the mythology and some of the characters from the second book, but we are riffing on that book, as we did in season one. We're creating lots of stand-alone stories that fit within that overall season-long quest. So it'll be a combination, as it was in the first season, of characters and elements from the book and those that are either of our own invention or our riff, if you will, on some of Terry Goodkind's mythology and characters."

Are you ready for more Legend of the Seeker?