What if the universe of Watchmen really existed?

It did, at least for a while. In November of 2007, I was lucky enough to be one of a handful of reporters invited to the Canadian set of director Zack Snyder's movie adaptation of Watchmen. It was like walking into the panels of the graphic novel itself.

The book imagines an alternate-reality 1985 New York in which the existence of superheroes has dramatically altered history and the reality of our lives. The United States won the Vietnam War. Nixon is still president. Superheroes have been outlawed. New York is a cesspool of crime and poverty. And the world is on the brink of nuclear holocaust.

Snyder—the youthful, energetic helmer of 300, itself an adaptation of Frank Miller's graphic novel—succeeded in adapting the book, once considered "unfilmable," with screenwriter Alex Tse and got Warner Brothers to green-light its production. His goal: to make a faithful adaptation of the book that changed everything.

Snyder built a "backlot" at the Canadian Motion Picture Park in Burnaby, British Columbia, a suburb of Vancouver. The sign on the production office reads "Veidt Enterprises, Inc."

The main body of the outdoor set is Watchmen's New York: one long avenue crossed by two side streets. On every street are store and building facades from Gibbons and Moore's elaborate alternate-universe New York. "This entire set is an easter egg," HitFix.com's Drew McWeeny says.

This night, Snyder is shooting a scene from the film's opening title sequence at a storefront with a sign for "JK Television" repair. It's 1977, the riots protesting the costumed adventurers. Extras carry signs that read "No More Masks" and "No More Vigilantes." The camera is on a crane that is trained on a close-up of a TV screen in the store window. It will pull out from an image of the riots on the news, through the "glass" of the window (the glass will be added in post-production). Someone will spray-paint something on the glass as the camera continues to pull out. Demonstrators, fists pumping, will cross on the sidewalk in front of the camera as it continues to withdraw. Suddenly, someone will toss a Molotov cocktail, and the window will explode in a huge ball of flame, searing some extras (covered in flame-retardant gel).

All around, the walls are plastered with posters familiar to readers of Watchmen: advertisements for the Pale Horse concert, the cover of the new Nova Express with a photo of an aged Richard Nixon and the headline "How Sick Is Dick?", an ad for the Pink Triangle Live show benefiting Gay Women Against Rape, colorful posters for Mmeltdown candy and sleek '80s-style ads for Veidt Sport, fading campaign ads for Nixon ("Four More Years").

There's the Treasure Island comic-book store (the "D" falling off the sign), with large fading posters outside for Tales of the Black Freighter, the comic-within-a-comic. 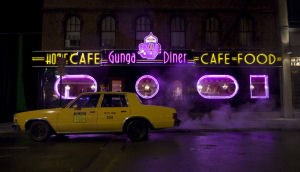 Up the street, there's the Gunga Diner, the Indian-flavored eatery, which is also a practical set: You can walk into the diner, with its orange and red walls, sit at the counter or in one of the red vinyl booths and look out the window at Treasure Island across the street.

Another scene is being shot. On this cold British Columbia night, we are huddled under the marquee of the Hollywood porn theater, next door to Rafael's Italian restaurant. It's 1985. A taxi waits at the curb. Inside sits Laurie Juspeczyk (Malin Akerman) in long brown hair and a tasteful '80s black dress, cinched with a wide belt. Outside, Dan Dreiberg (Patrick Wilson) holds an umbrella and speaks with Laurie through the cab window. His receding longish brown hair, oversize glasses and drab brown overcoat all scream 1985 and transform the youthful, athletic Wilson into the spitting image of Gibbons' paunchy, middle-aged retired superhero.

Sitting in his director's chair is Snyder, ballcap and scruffy beard, spirits high and joshing with the crew as the shot is set up. He leafs through a production notebook with his own sketches and panels clipped from the graphic novel as reference for his shots.

How is it that Snyder managed the impossible feat of adapting Watchmen to the screen after nearly 20 years of failed attempts? Snyder said it's simple: Just be as faithful as you can to the book, taking into account the differences between the media of film and graphic novel.

"I think the graphic novel sort of has its place in history," Snyder says between setups. He adds: "We didn't really know any other way to approach it other than to just try and do it as [is], ... [to] respect it. ... Because it all means something." Watchmen opens March 6.