With the world possibly ending tomorrow if all the theories about the Mayan calendar prove to be right, Seth Rogen figured he'd better rush out the first trailer for his new movie—which is, of course, about the end of the world.

The movie is called This Is the End (former titles included Jay and Seth Versus the Apocalypse and The End of the World), and it's the directorial debut of Rogen and his longtime writing partner Evan Goldberg (their previous screenplay efforts include Superbad, Pineapple Express and, um, The Green Hornet).

This Is the End is actually a meta-movie: Rogen, Jay Baruchel, Jonah Hill, Aziz Ansari, Rihanna, Paul Rudd, Danny McBride, Emma Watson, Michael Cera, Mindy Kaling, Craig Robinson and others all play themselves, as a group of actors all get stuck staying at James Franco's house during the apocalypse. Yes, Franco plays himself as well.

In fact, Rogen and Franco kick the extremely (and we mean extremely) NSFW trailer off with a pretty raunchy introduction of their own, before diving right into the hilariously apocalyptic action. Read the official plot synopsis below, then check out the trailer and poster—because if the Earth does go bye-bye tomorrow, this is all you'll get to see of the picture.

The comedy This Is The End follows six friends trapped in a house after a series of strange and catastrophic events devastate Los Angeles. As the world unravels outside, dwindling supplies and cabin fever threaten to tear apart the friendships inside. Eventually, they are forced to leave the house, facing their fate and the true meaning of friendship and redemption. 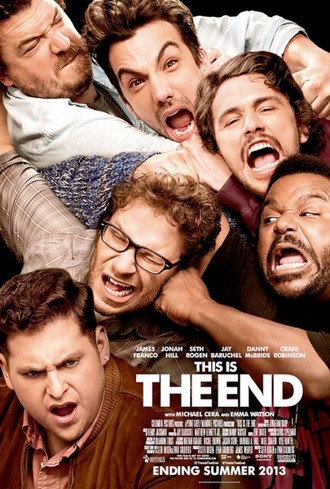