SGU's hot doc has got some spoilers for you

Syfy's Stargate Universe has amped up the action and taken the story into intriguing directions in the second half of the first season, and smokin' hot star Alaina Huffman (who plays Lt. Tamara Johansen) teased us with the adventures to come in an exclusive interview.

Huffman also talked a bit about her return appearance tonight on The CW's Smallville, reprising the role of Dinah Lance/Black Canary, in the season finale that airs at 8 p.m. ET/PT.

Following is an edited version of our interview. (Spoilers ahead!)

It was notable right from the start of the second half of the season that the action and adventure element of the show had really been amped up. Was that a deliberate choice, you think?

Huffman: The season itself was completed almost by the time we aired. We wrapped October 28th, and it aired October 3rd. ... So, yes, I think the intent was to introduce the characters, develop the characters, and then put them to work. And that seems to be the way that it's gone. 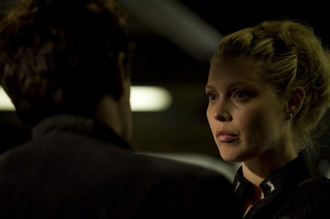 Your character, of course, has had some really interesting developments in the last couple of episodes that have aired. There's the pregnancy and some of the hard choices that she's facing. Can you talk about that? As I understand it, you were expecting your own child when this storyline was created.

Huffman: That's true. It's not the ideal situation, but I got pregnant, like, shooting the second episode. And so I told the producers. I was like, "Hey, guys, uh, I'm pregnant." And [executive producers] Brad [Wright] and Rob [Cooper], I called them into my trailer, and I told them, and we decided to keep it quiet for a while. And they said, "You know what? We actually thought it's a great storyline. We kind of wondered. We didn't really want anyone to be pregnant, but we did wonder what the circumstance would be, in a situation like this, if you're pregnant. I mean, it's a lot on the line." And so I said, "Well, I'll be the girl for the job." But then the funny thing was, when Brad was leaving my trailer, he kind of shook his head, and he says, "This always happens to us."

It happened with Amanda Tapping on Stargate SG-1.

Huffman: Amanda and Rachel [Luttrell on Stargate Atlantis]. I think all of the women of Stargate have had kids. ... You know, when you're in business for 16 years, ... it's going to happen. So, yes, I was pregnant in real life, and there was already an established sort of connection between Young [Louis Ferreira] and T.J., and it actually just kind of fell into place, and I'm very happy with the choice they made to write it in. You have to tune in to the second season to see what happens.

Well, without giving away anything, does that issue get resolved or does it develop further? How complicated does it become?

Huffman: It's complicated. As complicated as being pregnant in space with your ex-lover would be.

Can you give us kind of a preview of the end of the first season and what we can expect, again, without giving any spoilers? Will there be a big cliffhanger at the end?

Huffman: Yes, there is a cliffhanger, of course. It's a season finale. And, I believe I can say this, the Lucian Alliance makes an appearance. So that's exciting, I think, for the Stargate fans. ... It's a big cliffhanger that does get resolved, obviously, because we're shooting a second season now. But it complicates things, absolutely.

In the second season, do we have new characters or do you have some new actors joining? 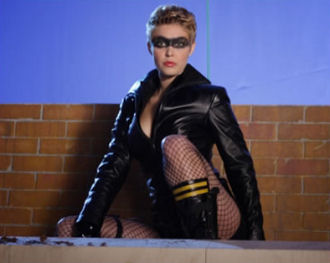 Huffman: Not yet this season, no. ... Second season. But I did just work with Michael the other day on Smallville, actually.

Oh, tell us about that. You're reprising the role of Black Canary?

Huffman: Yes, I am, and that will be in the season finale. ... Season nine of Smallville. Black Canary makes an appearance, as well as Hawk Man [Shanks], and that, I believe, airs on Friday. So, that was good fun, to work with Michael on that.

Do you have to wear the costume?

Huffman: I do, and it fit. Because I just had a baby, I was really nervous, I was like, "Oh, God, I hope this thing fits." And it fit. ... But, yes, there's the Justice Society, and then they sort of join in with the Justice League. ... I was asking for a hint from the producers of where they're planning on going for season 10, you know: Is [Clark] going to put on the suit? We want to know! And hopefully, hopefully that happens. And I really love the way that the Justice League has been involved in the series, and I hope to make more appearances in season 10. I'm shooting Stargate in Vancouver, [and] the studios are literally 10 minutes apart. ... And it's always such a joy to work on that show. Everyone's really lovely and pleasant, and it's kind of a geeky experience, because it's just really fun when we're all dressed up in costumes. And the guys make me laugh. We have a really good time working.

What else do you have coming up?

Huffman: I've got my own project that I'm developing. I'm going to release it on Twitter, so if anyone listening wants to follow me on Twitter, I'm going to make a release of a little sneak peek of what I've been involved with in the summer. [@AlainaHuffman] ...

It's a multi-platform project, and I'm hoping to develop, starting small, we've got kind of an idea and we've got one little part of the project done, and uh, yeah. It's along the same lines as sci-fi, and it's got a strong female character.