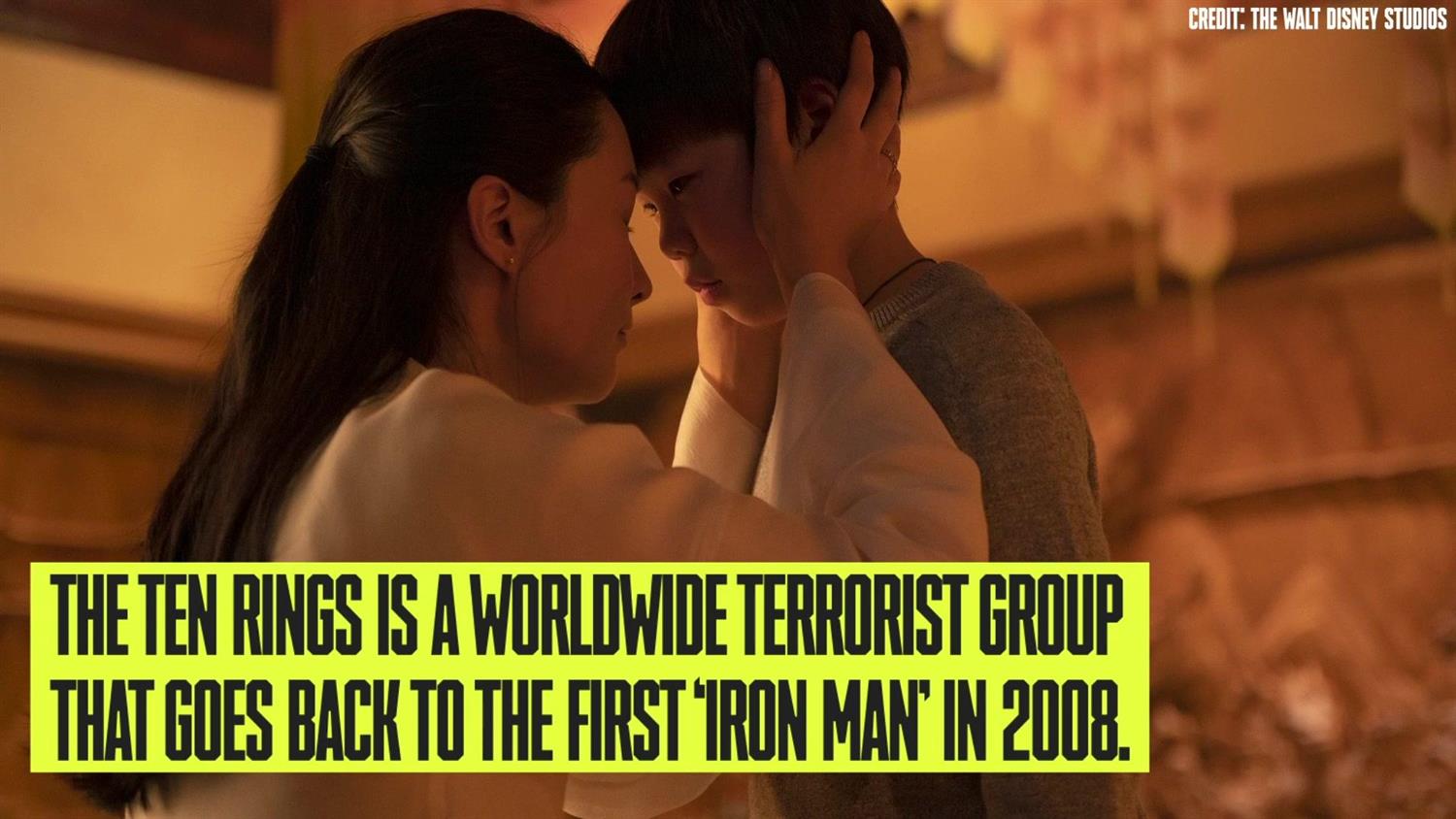 Shang-Chi: What to know before 'The Legend of the Ten Rings' punches its way into theaters

It's almost time to slip on the Ten Rings — a term that refers to a global terrorist group as well as mystical bling of immense power. After suffering several setbacks related to the global COVID-19 health crisis, Marvel Studios' Shang-Chi and The Legend of the Ten Rings is finally ready to deliver a stunning roundhouse kick to screens around the world. Simu Liu (Kim's Convenience) steps into the titular role of a master of kung fu, who would like nothing more than to leave his past behind. His reluctance to accept his destiny, of course, is what makes him worthy of being a hero in the first place.

"There was a time [as an Asian actor], I didn't want anybody to see me doing martial arts... but I grew up watching Jet Li and Jackie Chan, and I remember the immense amount of pride that I felt watching them kick ass," Liu said in early July. "I think Shang-Chi can absolutely be that for Asian Americans. It means that kids growing up today will have what we never did — the ability to watch the screen and to really feel seen."

Head below for everything you need to know about the title before it hits the big screen in early September...

Unlike Black Widow, which kicked off the feature-length side of the MCU's Phase 4, Shang-Chi will not be available on Disney+ — at least not at first. The film is slated for an exclusive theatrical release that kicks off Friday, Sep. 3 (aka Labor Day Weekend). In accordance with Disney's latest rollout model, The Legend of the Ten Rings will only play on the big screen for a duration of 45 days before making its way to the world of streaming in October.

During an investor call last week, Disney CEO Bob Chapek called the strategy "an interesting experiment," most likely referring to the fact that the movie is going to serve as an important litmus test for box office strength amid the ongoing COVID-19 pandemic (cases of the virus are currently on the rise due to the highly contagious delta variant).

Liu seemed to address Chapek's remarks over the weekend via social media, writing: "We are not an experiment. We are the underdog; the underestimated. We are the ceiling-breakers. We are the celebration of culture and joy that will persevere after an embattled year. We are the surprise. I’m fired the f**k up to make history on September 3rd; JOIN US."

Marvel Studios President Kevin Feige ended up having to do some damage control, addressing the controversy at the movie's Los Angeles premiere Monday evening.

“He is not a shy man," he said of Liu. "I think in that particular tweet you can see — and I think everyone does — a misunderstanding. It was not the intention. The proof is in the movie, and we swing for the fences as we always do. With the amount of creative energy we put in and the budget, there’s no expense spared to bring this origin story to the screen."

Tickets are now available for pre-order.

Speaking with Empire for the magazine's September 2021 issue, Feige revealed that Shang-Chi has been on his MCU wish list for close to two decades now. When he first became a producer at Marvel Studios in the early 2000s, a young and bright-eyed Feige drafted a list of characters who would serve as the foundation for an onscreen comic book mythos that has brought in billions of box office dollars over the last 13 years.

"I can't remember how many titles were on there. But [it was] 20 or so," Feige recalled. "So many of the titles we identified early on was with the hope that we could do all sorts of different films, starring all sorts of different types of people. And for the last five years, we've been actively working on bringing the film to life."

Of course, the master of martial arts did not show up in Phase 1, despite the fact that his dad's criminal outfit, the Ten Rings, dates all the way back to the first Iron Man. Some have speculated that the incredible success of 2018's Black Panther — both culturally and financially — convinced Marvel that diversity can make money, but Feige shot down the theory during his conversation with Empire.

"I think it bolstered our confidence and our belief, but we were heading that way already," he said. "I remember seeing a viral video when the Black Panther poster first came out. It was some young men in a movie theater overwhelmed with excitement at seeing this poster, and it was moving because people were excited about the movie we were making. But it was also a harsh realization that they were reacting that way because they had not seen it before. So, Black Panther really coalesced the notion of, 'Everybody deserves to see themselves portrayed in these larger-than-life ways."

The character of Shang-Chi was created by Jim Starlin and Steve Englehart in the early '70s during the peak of America's fascination with kung fu movies.

As we alluded to above, the Ten Rings is a worldwide terrorist group that goes back to the first Iron Man in 2008. They were the ones who kidnapped Tony Stark, which led to the birth of the billionaire's heroic persona. In a strange way, we have the Ten Rings to thank for the existence of the entire Marvel Cinematic Universe.

The organization sort of returned in Iron Man 3, though their leader — the Mandarin — turned out to be a two-bit actor named Trevor Slattery (Ben Kingsley). In the follow-up short, "All Hail the King," an imprisoned Slattery learned that his stint as the faux Mandarin did not sit well with the actual Mandarin (real name: Xu Wenwu; played in Shang-Chi by Tony Leung).

In a divergence from the comics, the film depicts Wenwu as the father of Shang-Chi, a man whose body could be designated as a deadly weapon. From birth, he was trained to be a remorseless killer. However, the boy didn't exactly want to go into the family business and ended up leaving the Ten Rings for a quieter life in San Fransciso, where he works as a valet alongside his friend, Katy (Awkwafina). When his dad comes knocking, though, the eponymous hero is forced back into a shady underworld of hand-to-hand combat, underwater dragons, and battle-to-the-death cage matches.

In addition to all of the new faces, longtime Marvel fans will also get to reconnect with several familiar faces like Trevor (Kingsley's presence at the premiere seemed to confirm this), Doctor Strange's Wong (Benedict Wong), and The Incredible Hulk's Abomination (Tim Roth).

Fear does not exist in this dojo

The Legend of the Ten Rings was helmed by Destin Daniel Cretton, a filmmaker known for 2013's Short Term 12 and 2019's Just Mercy. Production kicked off in Australia last spring before shutting down almost immediately in the wake of coronavirus concerns. Cretton, who had just become father, decided to be extra cautious and put himself into quarantine for the sake of his newborn baby. Filming restarted in late summer/early fall of 2020 and wrapped around Halloween.

"There's no single Asian American voice. So how do we create something that speaks to the wider Asian diaspora?" Callaham told Entertainment Weekly earlier this summer. "How do we make something that will be exciting and entertaining, but also personal to all these people? What [Destin and I] landed on was the very simple reality of just putting this character on screen, at the level that Marvel does. Because when we turned on our televisions, neither of us were seeing Asian people. And we were excited to be able to change that."

While it could very well have been the post-premiere euphoria talking, the first reactions to the film were glowing. For example, Drew Taylor called the film "an absolute triumph" that is "unexpectedly spiritual and emotionally complex, with some of the very best action in the MCU." The Collider and SYFY WIRE contributor also teased that the movie tips its hat to a number of beloved cultural influences — "everything from Jackie Chan to Hayao Miyazaki."

Collider's Steven Weintraub wrote that it's "like no Marvel movie you’ve seen. Love that it opens the door to a new world that I can’t wait to see more of. @SimuLiu literally kicks so much ass and he is perfectly cast. Got to see it in @imax tonight and this is how you want to see it. Looked and sounded perfect."

Scott Menzel, founder of We Live Entertainment, christened it "the best superhero film of 2021 so far." He continued: "The action scenes are simply spectacular, especially the train & skyscraper scene. Best martial arts I’ve seen in a long time. Simu Liu & Awkwafina are terrific."